For awhile there we were thinking we had some major karmic debt that was crashing down on us demanding repayment, what with the kids getting hurt and bringing home health plagues at every turn.

But the last week or two has been pretty great, I have to admit. We have had some major landscape plans coming to fruition, which makes me very happy. I had one side of the garden area out front bordered in. The front and back deck have been getting stained and are almost done. Paul made me 2 raised garden beds and set them out front and ordered up some dirt. That was his excuse to play with his new toy:

He used this bad boy to move the dirt into the new raised beds.  We got part of the first one filled:

and then ran into a snag: 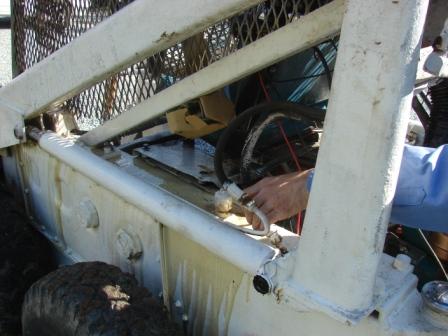 A busted hydraulic line slowed things down a bit.  I spent time admiring my roses while I waited.

I had a bunch of vegetable plants waiting to go in, and while the machine was being worked on they started looking rather sad.  They also suffered some Sushi – style damage.  Bite marks, chewing, and the like.  So when everything was ready for them to go in the ground I jumped to it.   Unfortunately I wasn’t exactly prepared to do it.  I ended up in the big ol’ box o’ dirt barefoot and using my hands to get the plants set and happy.  It was evening and was somewhat chilly but the dirt was still warm from being in the sun all day.  There was actually something really fulfilling on a primal level about being in the dirt like that and setting the veggies in place.

Anyway I still have a lot of work to do and more plants to put in, but the seedlings are happy in their new home:

Now they just need to grow big and strong and give us some yummy tomatoes and veggies!  So the work continues.  The other box needs to be populated with some squash and I need some flowers to fill in the gaps.  But everything is coming along nicely and I think it’ll look good for Neve’s birthday this weekend.  My baby’s turning 5! And speaking of babies, my little Oona discovered Oreos a few days ago.  Yummy!