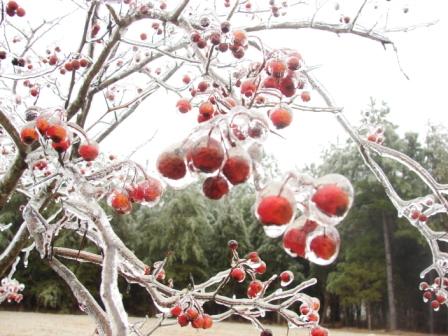 What’s funny is that as I write this it is in the mid 60’s outside.  No wonder we can’t get well – the weather can’t seem to make up its mind.  We had quite an icy week.  The girls had 2 days off due to the hazardous road conditions, and it was quite a disappointment, since we were hoping for snow.  Emily and Neve were all set to make snowmen and igloos, “and a snow castle, too!!!”  Well, that didn’t work out so well but Emily still explored outside a little bit, but finding only a few icicles here and there (which always reminds me of Ralphie from A Christmas Story) she decided ice was simply no fun. 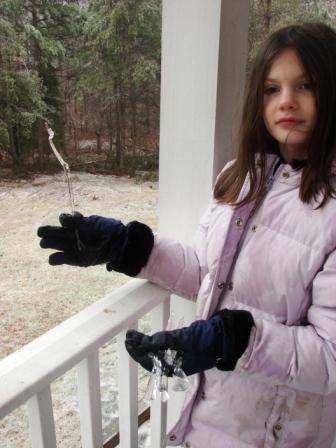 I will say that even though I am no fan of ice it was rather delightful not to have to wake up early those 2 mornings for the bus.  There was also no chorus practice or Girl Scouts for Emily on Tuesday which made my day a whole lot easier than normal.  We celebrated by eating blueberry pancakes shaped like snowmen for breakfast.  And the satellite install guy came out even though we felt sure he wouldn’t, given that climbing onto an icy roof was probably not the smartest thing to be doing.  Turned out he wasn’t the smartest satellite installer guy.  He ended up being at our house for 5 and a half hours and then Paul still had to finish up the job for him after he left.  I may have mentioned this already.  Anyway the satellite works now and it has helped out in the mental health department for me dramatically, as has (surprisingly) having a tv in the bedroom.  Oona has been much easier to manage in those early morning hours when I am not ready to be awake and she has had enough of sleeping.  Now I turn on Spongebob and we can snuggle until I am in a happier and more wakeful place.

The two days reprieve from school also gave Emily more time to work on her diarama, which was supposed to represent an arctic biome, complete with 2 animal and plant types.  She spent quite awhile researching, and then we threw it all together in just under an hour once all of the information was complete.

She included polar bears, arctic foxes, bearberry plants and caribou moss.  I was ecstatic once it was complete.  One less thing to worry about!

Sadly our winter weather lasted all of 3 or so days and today it has been rather warm.  Don’t get me wrong, I am glad that the sun and dryness and warmth motivated Paul to clear out a bunch of scrub behind the house and clear spots for my garden shed and pumpkin patch, but I hate these warm day fake – outs.  You see, it goes like this:  it’s winter.  You know it’s winter because the calendar says so.  February means winter.  But suddenly the warm weather pops up on you and you’re outside without a coat looking at the grass and the garden beds and the green sprigs that have been fooled into poking up through the dirt and you start thinking about spring, and you catch that bug.  You know what bug I mean – the one where you want to scrub out the house and replace the flannels with cottons and organize your seeds and go buy some bulbs and little flowers and just generally do all things spring – like.  Except that WHAM!!  Before you know it it’s 12 degrees and snowing!  Just like that!  I am a firm believer that winter should be winter, spring should be spring, and so on.  I am not a fan of ambiguous weather.

Which is why I have shunned the out of doors for today and instead have focused on finishing up that sock that I have been working on forever and a day.  I haven’t gotten to the heel yet, but it is definitely going more quickly this time, perhaps due to the fact that I could probably work the chart in my sleep at this point.  The only glitch in my plan has been the entrance of Oona into the terrible two’s.  The thing about this is that I didn’t see it coming.  Emily and Neve did not go through the terrible two’s.  Wait!  Do not scoff!  It was far worse than you think!  They went instead through the terrible three’s!  The terrible three’s is much worse because they are fully articulate at that stage and have no problem making clear why they are throwing their tantrums and delight in embarrassing you with this info in public places and in front of family and friends.  They also have the dexterity and strength to get into whatever it is they want at 3.

Oona has always been a delightful, sweet little thing, so I figured she was on track to become horrible at a later stage in the game as well.  The last week has proven me woefully wrong.  She is my first biter, and she gets great satisfaction out of causing me awful pain, either with her teeth or fingernails.  When I am knitting she will throw herself upon my yarn and needles as though she knows how best to cause the most dire problems for myself and for her (needles I say!!!).  If you allow her to self feed (which she is quite capable of) she will instead feed all of her food to the dog.  The dog LOVES Oona.  She adores pulling Neve’s hair and has twice left large purple bite marks on Neve’s face.  She can and does remove any article of clothing that is put on her, even those that button or snap up the back.  Ditto the diaper.   There is nothing that she is not interested in breaking or tasting.  Her mess making skills are unparalleled.

At first I could not imagine why my sweet tempered little cutie was acting this way suddenly.  And then it hit me – she’s 18 months old, and at the right stage for the terrible behavior that is the hallmark of her age.  And she is enjoying every minute of it.