Birds that are engineered by us humans to grow at an alarming rate so that they are ready for “harvest” by about 8 weeks of age.

Mine are now 14 weeks old and they are still not ready for harvest.

I have to admit, I was getting really, really worried about this.  We’re spending WAY more on feed than expected and it has been feeling like we’ll never get these birds into the freezer.

Internet to the rescue!

I found some message boards for chicken farmers talking about this very thing.

You see, I’ve been feeding a combination of commercially – prepared and processed feeds along with fresh pasture.  We don’t generally leave just a huge feed bin out constantly full of food.  If you do, they won’t forage.  We wanted a better tasting, healthier bird.  Less commercial stuff.  Apparently, when you limit the processed grain and turn them out onto fresh grasses regularly, they grow a lot slower.  Their mortality rate is much lower.  And – get this – they end up tasting better.

I am feeling a lot better about these birds, if not poorer, given that we’ve fed them several weeks longer than anticipated!

I’ve also recently been spending more time over at Juniper Moon Farm.  As you may have read, Susan has been ill so I have been helping out.  It’s been wonderful spending some quiet time in the mornings and the evenings with the animals. 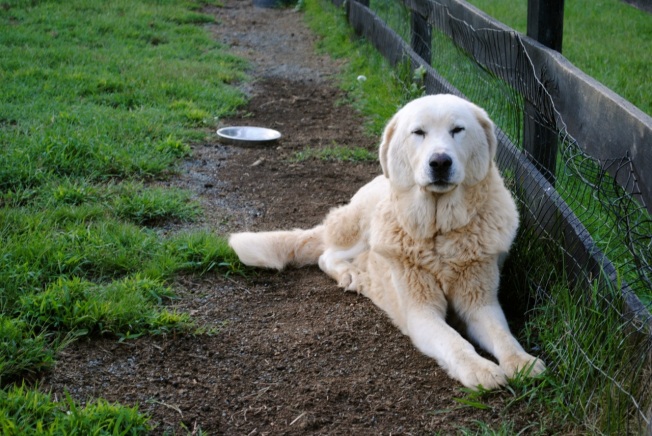 Only the dogs seemed to want to cooperate for photos, however.  Everyone else was too busy taking advantage of the cooler temperatures and dewy grasses.

Oh great, not the paparazzi again.  Can’t you see I am eating here???

I have been trying to make friends with little Stella, as well, but is has been mostly in vain.  Her mother is so friendly and approachable, but Stella is much more of a tease.  She looks all sweet and cute and cuddly in the pasture, but try to approach her and she runs off to mama, tail between her legs.  She doesn’t look back until there’s a giant Luna safely between me and her.