Something I’ve learned over the years is that farming and raising livestock is not for the weak. Not only is it physically (and emotionally at times) demanding, but it can also at times be downright gross. This is one of those stories, and I’ll warn you: if you can’t handle light gore, this post is not for you. But, it’s something that happens, and because it has a happy ending, it’s taken on a dark comedy aspect.

A while back, one of my older ewes, Willoughby, was being bullied pretty hard by our goat, Caramel. She was keeping her from eating any hay or grain, and by the time I caught in to what was up, Wils was feeling a bit weak and anemic. At that point, I separated her out and put her in her own pen with fresh grass and fed her with high-protein alfalfa hay and grain so she could regain her strength. At the same time, Caramel turned her bad behavior on another ewe, and earned herself a ticket to a different farm with other goats where she wouldn’t cause so many problems (she’s doing very well there, btw, and has happily fallen into line).

Willoughby recovered fairly quickly and before long I had her back on regular hay and was preparing to release her back in with the other sheep.  Except for one thing; she was favoring one leg. It wasn’t a terrible limp, but I checked out her hoof for signs of injury or infection, and found nothing amiss. I felt her knuckle and squeezed her leg a bit, but it all looked and felt normal. So I kept her secluded a bit longer. I figured at worst it was a sprain, and I’d let her recover with minimal interference.

But….days went by. Then weeks. She wouldn’t put weight on her leg. In fact, it started to look like she was curling it up under herself. I was wracking my brain trying to find anything wrong with this leg when we had an unseasonably warm spell. That’s when I noticed that this leg of hers had a smell to it. A smell that was undoubtedly rotting flesh. Immediately I started inspecting further up her leg, completely frustrated and feeling helpless. I still found nothing to explain this. That is, until a hunk of wool pulled off as I brushed by her knee joint. Under the wool was a tiny, thin line indented into the flesh, as though some very thin band had wrapped tightly around her leg in that spot. Some very thin band like……..a strand of plastic hay wrap?

Now, when we get our hay bales, they are delivered with plastic mesh wrapped tightly around them. When I put them in the field, I leave that mesh intact, because even though I don’t like it (and it gets into the ground and just is a nightmare), taking it off means that the hay bale falls apart and gets mostly wasted. I’ve had a metal round bale holder on my wish list for ages, but they aren’t super cheap. Now, though,  I’m going to work harder to make that happen sooner, because this is where it all clicked into place.

That leg of Willoughby’s had been tourniqueted by a thin strand of that plastic at some point, and her leg had been slowly starved of blood until it died.  Now I was left with a whole new dilemma: amputate the leg or put her down? Either way I’d need a vet, and I couldn’t decide how to handle it. She seemed happy and healthy otherwise, but goodness, how much was a farm visit to amputate a sheep leg going to cost?

The first thing I did was get antibiotics on board. The leg above the knee looked absolutely fine, and her temperature was normal, but I wanted to make sure that she didn’t become septic. Also, I felt like the worst shepherd in the history of the world for not figuring out the issue sooner.

This whole thing coincided with one of the busiest few weeks for me. I had picked up extra hours at work, Neve had extra-curricular stuff going on at school, and I kept pushing off deciding how to handle Willoughby.

Then one day at feeding I noticed that when Willoughby came galloping up to the trough (even on three good legs she can move!) that something seemed……off.

And by off, I mean OFF. The offending leg portion was simply gone.  Her remaining stump end was clean and scabbed over, and she didn’t seem to have any issues with it.

After a few moments searching, I found the leg part in the field where she likes to lie in the shade, sitting there as though when she stood up, it had simply opted to stay behind.  I sprayed her stump end with an antibacterial wound spray and sealant, just to be safe, and kept careful watch over her behavior for the next week.

It’s been well over a month now, and she’s still fat and happy. Her temperature continues to be normal, so it seems that the issue really did stay local to the lower leg and went no further.  I’ll be adding “plastic bale wrap tourniquet” to the list of things to look out for. 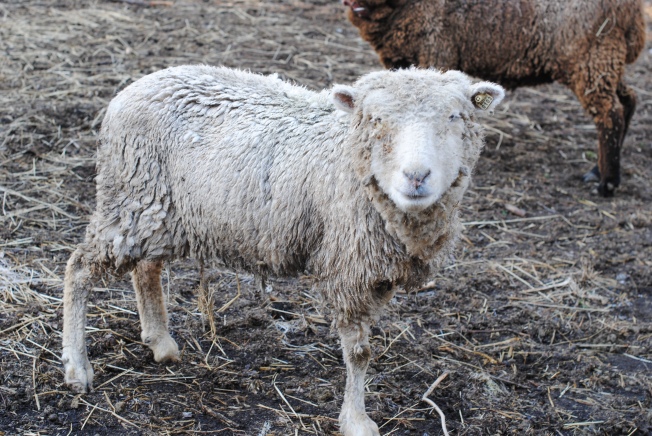 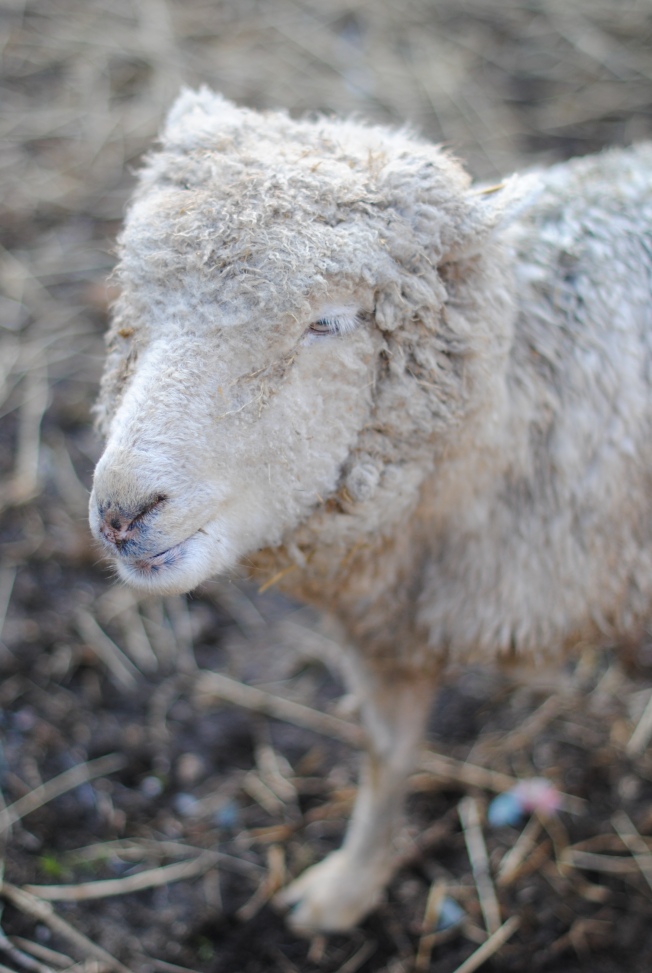 I feel pretty bad for my little tripod lady, but damn if she’s not a hardy one! Now that some time has passed, I can tell the story of how my sheep’s leg fell off. And maybe get a laugh or two.

3 thoughts on “Not For The Squeamish”