I wish it was always as easy to get up before dawn as it was in Scotland. Many mornings we had early ferry check-ins, but little problem rousing ourselves from sleep (and neither of us is a morning person). It must be a vacation thing. And we had a good routine. Wake up, throw on clothes, turn on the heat. Kim would open the back of the van and turn on the gas, I would get the stove going to make coffee. It was no different that beautiful morning in Skipness. We woke to what sounded like an angry chicken (it turned out to be a pheasant being chased away from the water by a seagull), and watched a stork catching his breakfast. Also, those “Pheasant Crossing” sings were no joke. Those damn things were ALL over the road and in the way that morning. But, we aren’t used to pheasants, so it was delightfully Scottish rather than aggravating.

The ferry to Islay was called “The Finlaggan” and was just as luxurious as the Hamnavoe had been. The parking deck even had a large car lift to fit more vehicles.

Unlike the Hamnavoe, we didn’t nap on the way over. It didn’t have quite the same sleep-inducing rocking motion, and so we found a small table to sit at and watched the scenery as the boisterous group at the next table over spoke in what we assumed was Welsh.

Since the weather hadn’t made up its mind between pouring rain and sun, we settled on setting out northwards to find the Kildalton Cross first thing, as it was fairly dry and the cross was located out of doors.  Though only a few short miles from the ferry, the road was narrow and rutted, with more traffic than you’d expect. And, for extra measure, a random peacock wandering about in the way!

The sign on the gate to the churchyard. I have already declared I must have one made for my pasture.

The Kildalton Cross, created in the 8th Century. 8th!!!

Sheep weren’t the only marauding livestock. 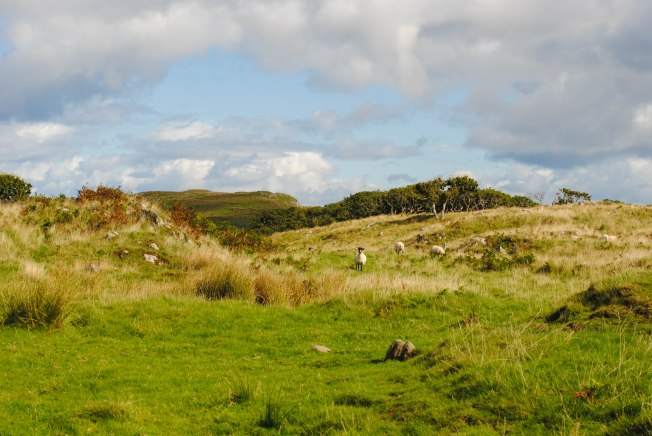 Such a perfect scene of Scottish Blackface sheep grazing freely, no predators to speak of (no, seriously. I asked what predators they have for sheep in Scotland, and the answer, essentially, was none. Some large birds of prey may occasionally try for a newborn lamb, but that’s pretty much it).

What a life to live!

They say if you’re lucky you’ll spot otters in these protected coastal beaches. We didn’t, but loved the “Otter Crossing” signs.

For lunch we headed to the cafe at Ardbeg Distillery. We are fans of Islay whisky, and the distilleries were the main reason we chose to spend a day there. 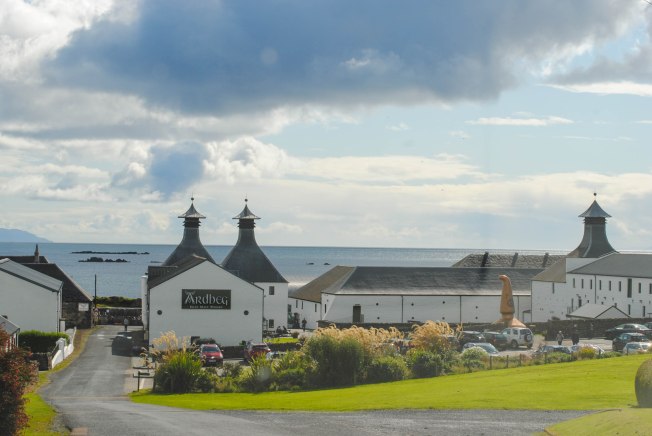 All of the distilleries on Islay are lovely, but the main 3: Ardbeg, Lagavulin, and Laphroaig, are rather close together on the eastern coastline. All 3 therefor have a similar look: white with large black, block-style lettering. This was to help ships differentiate them, as they are easily readable from the sea.

Yes, you can smell the whisky as you walk around, and yes it smells delicious.

Although we would have enjoyed touring all the distilleries, we settled on Laphroaig. When you buy a bottle of it, you are given a code. Register it online, and voila! You now own 1 square foot of peat across from the distillery. If you visit, you are given one dram of whisky as your rent, along with a flag of your nationality and the GPS coordinates to your plot. We of course had registered months and months ago, so were were excited to collect or rent and plant our flags (they even have walls of wellies for you to use to walk out into the field!). 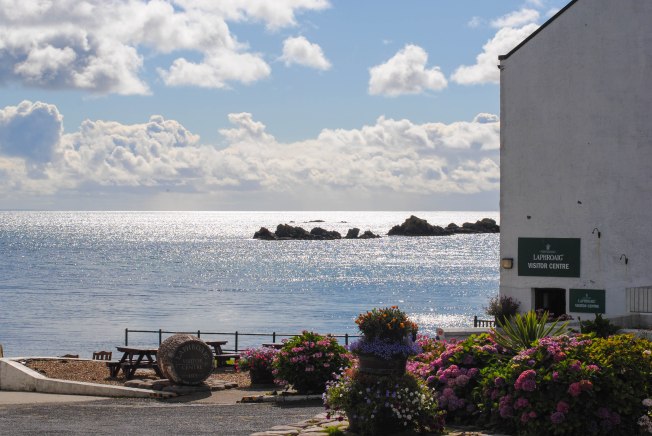 The barley floor. We got to taste pretty much every step of the process. It was quite fascinating, actually.

The only snag we hit that day was needing petrol for Fergus. What we hadn’t realized is that most of the petrol stations on Islay close at 5pm. We spent a bit of time searching for the last remaining station – open until 7 – before we decided upon a spot to park for the night. 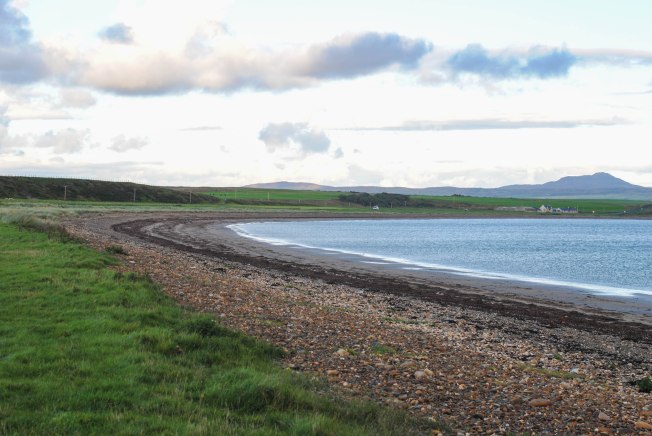 We ended up on the beach in Bruichladdaich just before some rain showers settled in (though we did manage some pictures and shell collecting as well!) 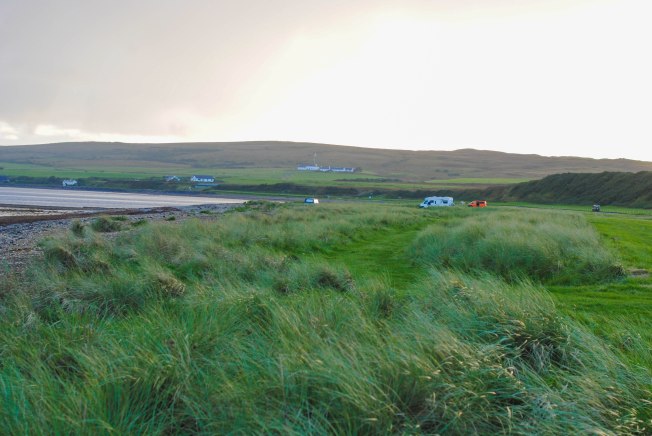 Our nearest neighbors were far enough away that we felt we had decent privacy. 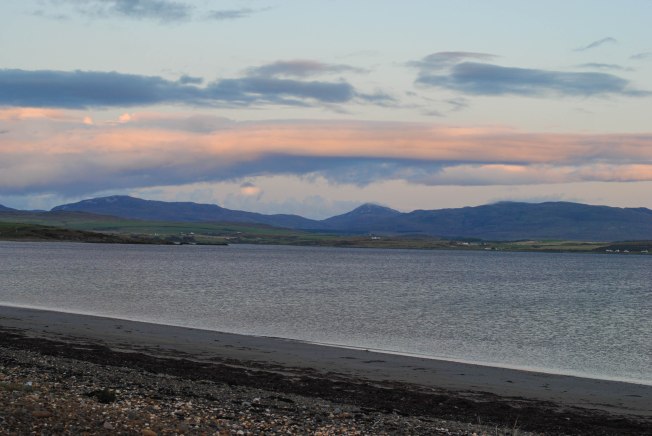 Across the road from us in the other direction was a field full of – of course! – more sheep and cows. While walking along the beach we saw plenty of hoof prints and sheep poop, so we knew they wandered over at least once in a while. In fact, they were all in the road the next morning as we drive through the pre-dawn dark to the ferry.

Islay, we barely knew ye. We’ll be back!