Getting off the train at Waverly Station in Edinburgh and emerging on the street was like a homecoming for both Kim and I. We had been been there before and fallen completely in love with it. Even better, we knew exactly where we needed to go and how to get there without having to consult a map.

I’m going to condense our time in Edinburgh down to one post, even though it was quite a full weekend. We stayed at The Hub on Rose St – it felt like a palace after living in Fergus all week! And with a shower! I had been using face wipes and dry shampoo all week, but boy did I enjoy getting a shower in.

We went out after checking in and had dinner before walking the Royal Mile in the dark. It was pleasant to see that there wasn’t a whole lot that had changed, and we really did still know our way around well.

Lady Stair’s Close became our preferred cut-through when visiting the Royal Mile. Edinburgh is a very walkable city, and we saw far more of it this time around than either of us previously had. In fact, on Sunday we ended up walking about ten miles, and it never felt like work. 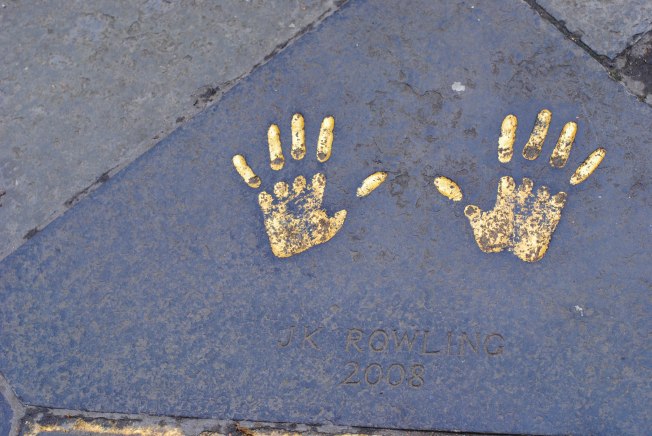 JK Rowling’s handprints just off the Royal Mile, next to Ian Rankin’s.

Since I had missed St Gile’s Cathedral the last time around we wandered around inside and even were present for a service (I’ll have you know that us two heathens recited the Lord’s Prayer perfectly along with the minister). We did appreciate the many scientific causes the church had supported over the years, and read many interesting memorials to early female physicians within its walls. The sheer amount of history some of these churches hold! 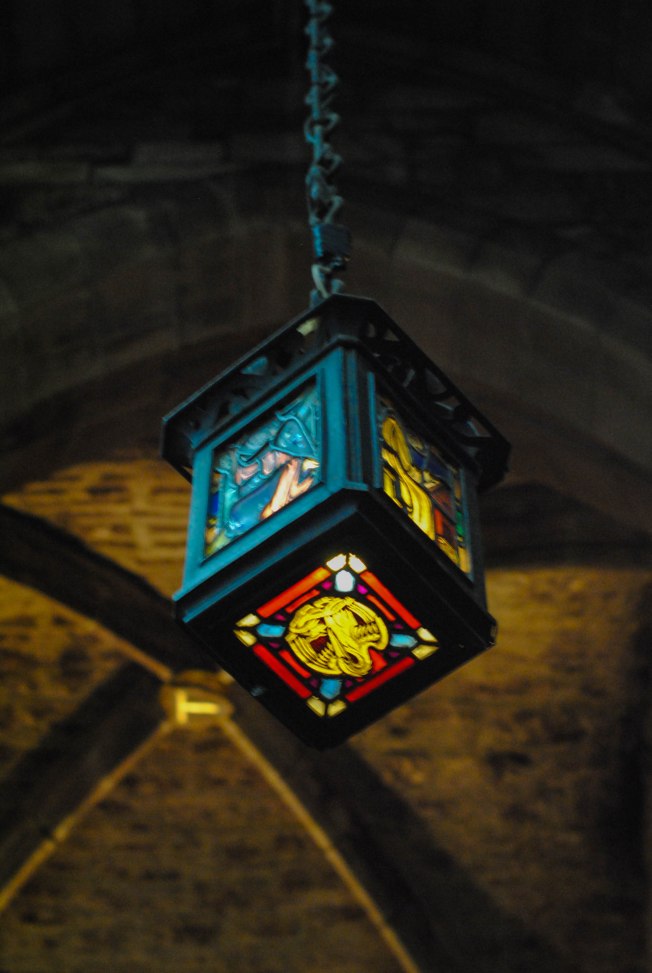 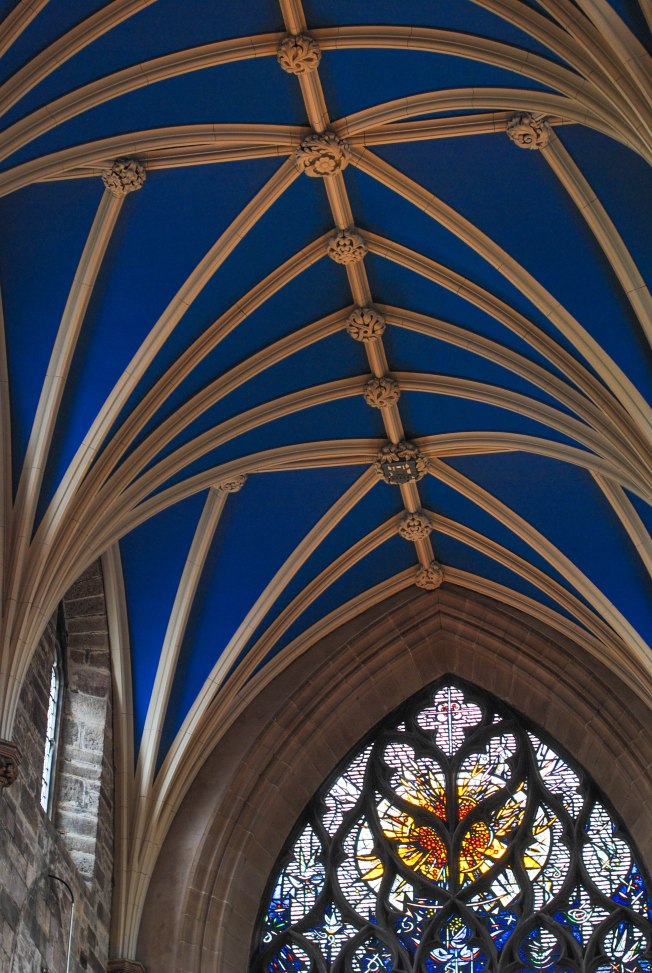 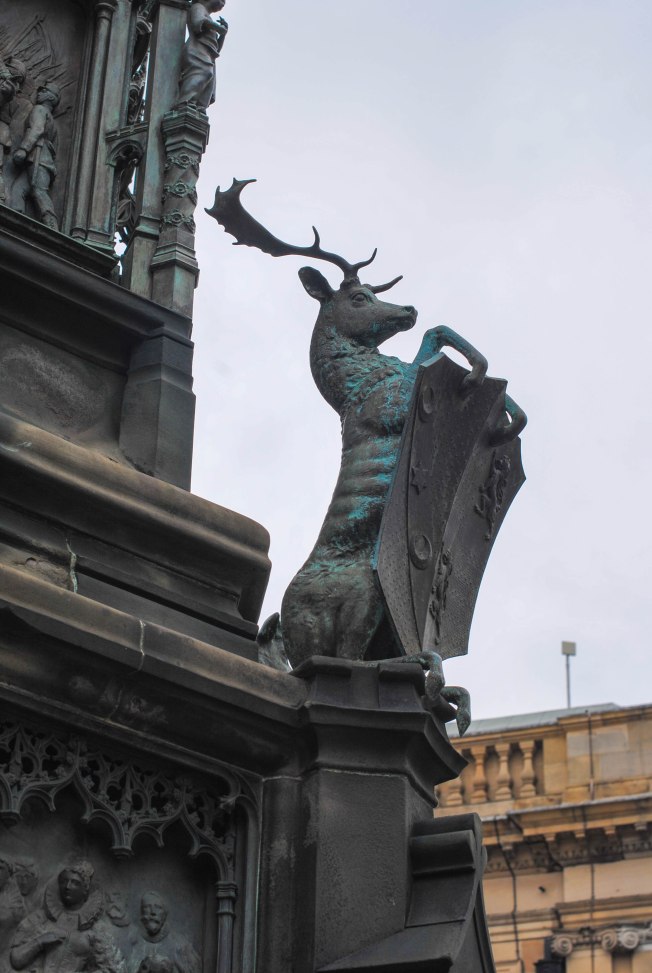 Armstrong’s Thrift Store on the Grassmarket is always a good time. We were also lucky enough to find that there was an open-air market happening full of delicious street food. I got myself a Haggis, Neeps, & Tattties hand pie and it was wonderful!

Then I showed Kim the spot where I had fallen on my face after tripping over a concrete barrier last time here (hint: right where I was standing when taking this shot).

Victoria Street! There were many, many anti-Trump products here. Whatever your feelings are politically, I can tell you, hands down after being there, they despise him. 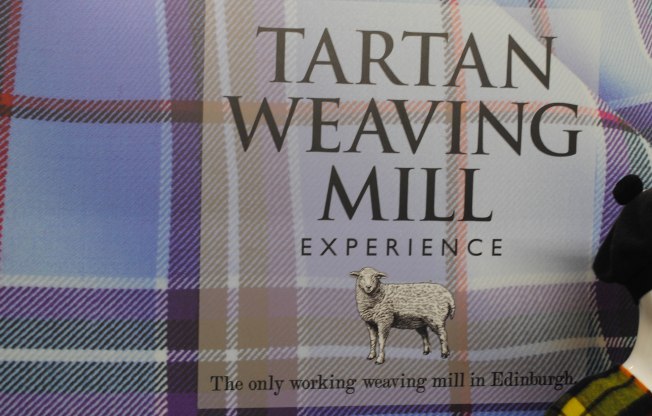 Kim was also surprised that I hadn’t made it into the Tartan Weaving Mill last time (how?!) so we rectified that situation right quick! This is also where I realized I want all of the Harris Tweed. All of it!

For dinner (and because it happened to be my birthday!) we went to The Witchery and ate in the most beautifully decadent Scottish Gothic dining room I’ve ever seen.

To cap off the night, we took a tour from The City of the Dead Tours. Our guide told us some wonderfully gruesome Edinburgh history before leading us into the restricted section of Greyfriar’s Kirkyard (this is the reason we wanted this particular tour – entry into an area no one else can go!) where we stood inside the Black Mausoleum, where supposedly the Mackenzie poltergeist attacks visitors regularly.

Nothing happened aside from a jump scare at the end (yes, I let out a startled scream, but quickly it turned to laughter), and the ability to forever tell people we were locked in a haunted mausoleum in Scotland after dark. 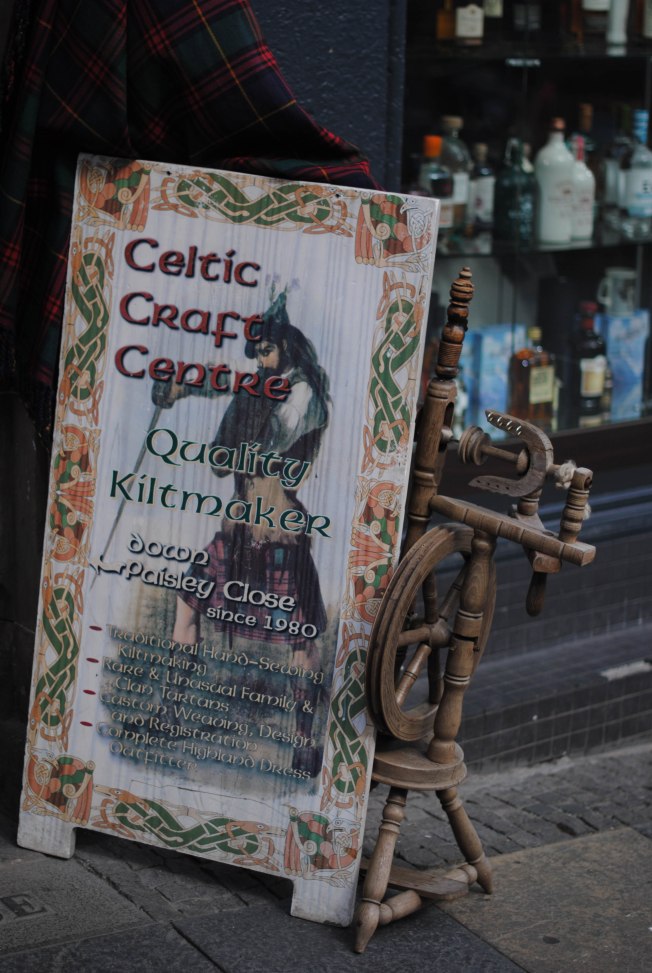 The next morning we went out bright and early to get ourselves tattooed!

We hadn’t planned originally to get the same image, but this one kind of presented itself during the trip and seemed meant to be.  I like that it has Viking and Celtic elements and is also used in imagery at Loch Ness. Every time I look at it, it reminds me of the trip, and makes me happy all over again. 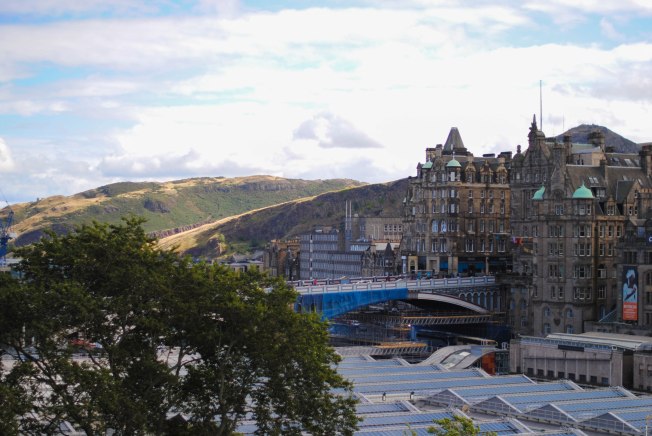 Since the tattoo process was incredibly quick, easy, and painless (ask for Marc at Studio XIII – you won’t be disappointed!), we had a lot of day left ahead of us to fill, so we headed to Prince’s Street to climb the Scott Monument (in honor of Sir Walter Scott). If you can manage 287 tightly spiraled and enclosed stone steps, you are rewarded with incredible views of the city. 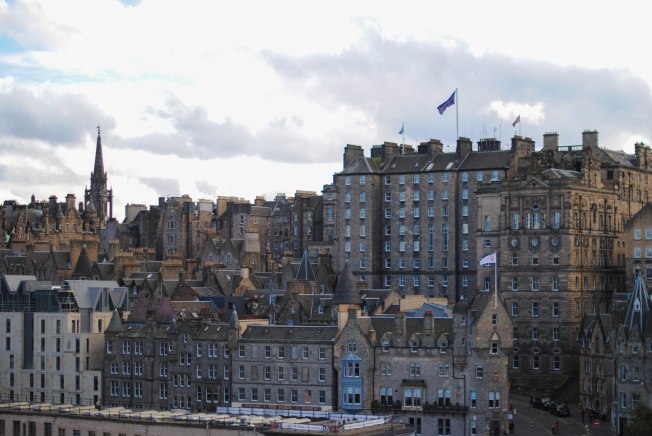 Looks like a scene right out of Harry Potter, no? 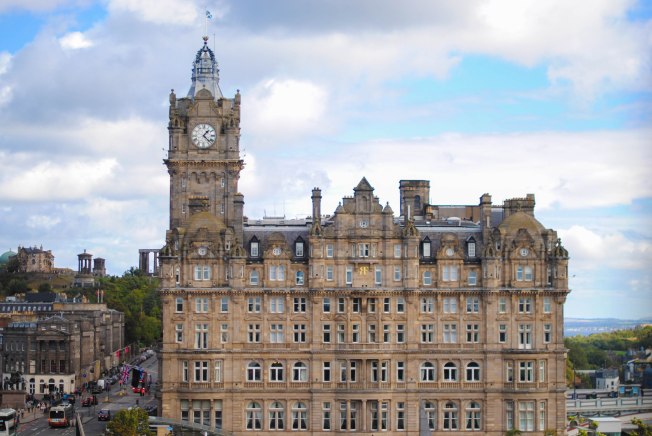 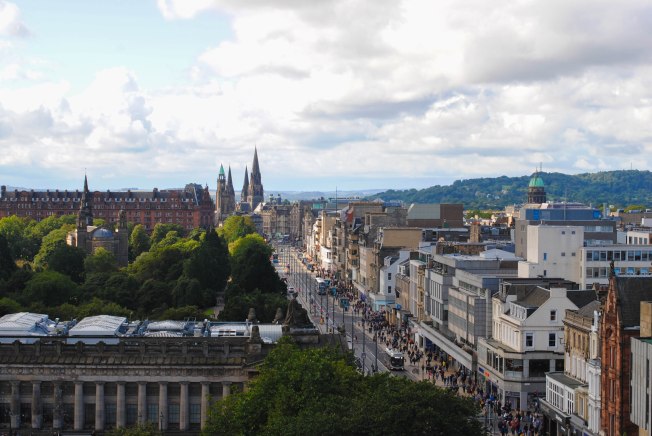 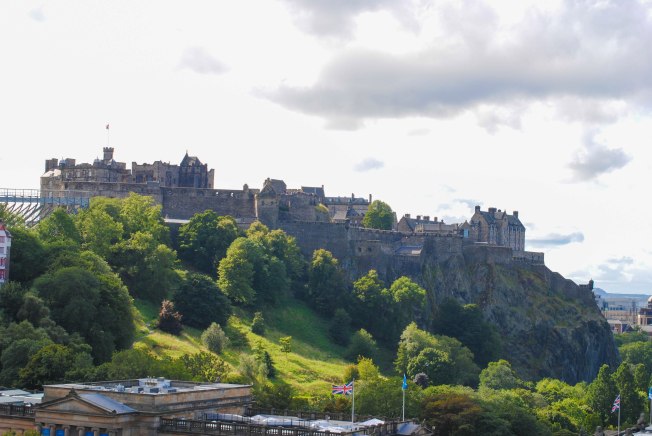 Calton Hill, and the Firth of Forth.

We worked up quite an appetite from all the climbing and ducked into a Pret A Manger for coffee and a sandwich to take on our walk into New Town and over to see Dean’s Village, a quaint old mining town from days gone by. (Also, I need a Pret A Manger in my life – Charlottesville, get on it!) 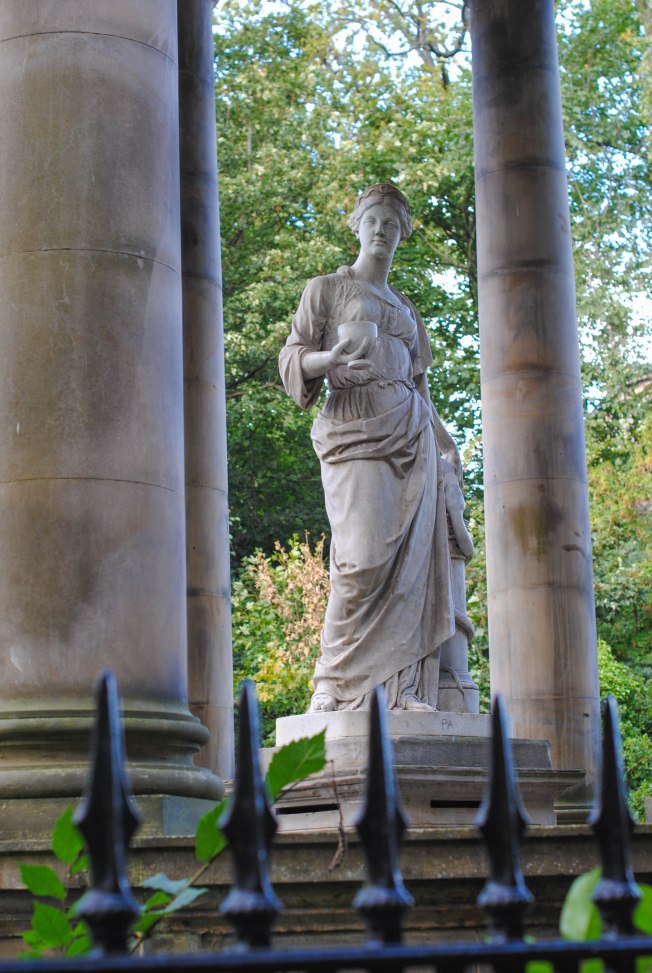 While strolling along the waterway we happened upon a knitwear photoshoot in progress. What are the odds? It turned out to be Jade Starmore, and from what I saw, the new patterns are quite lovely ( as was she and all the models and assistants I spoke to)! 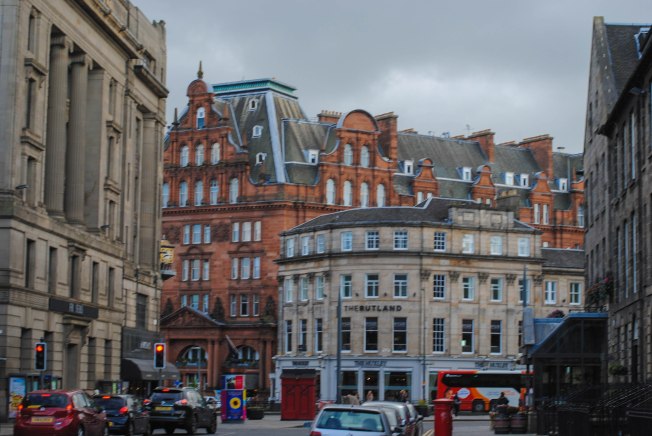 Though we had spent the day strolling in the New Town area of the city, Old Town kept calling to us. There’s simply something magical about all that old architecture. Plus, I felt compelled to have a pint in an old pub for our last night there. We had steak and ale pies and some wonderful draft cider before finishing out the daylight right back in Greyfriar’s Kirkyard. 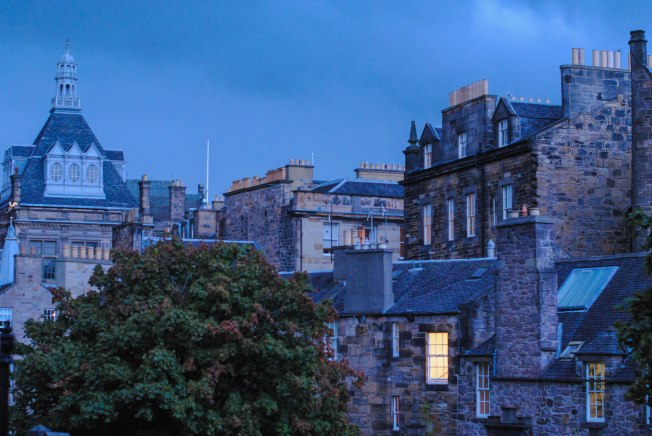 As we stood amongst the very old gravestones, willing it to not be our last night, it began to pour. We were a long walk from our hotel, but getting drenched in the graveyard seemed a fitting way to end our Scottish vacation.

So long for now, Edinburgh. You’ll always be my second home.