Here it is New Year’s Eve and I still haven’t posted my Christmas pictures.  I suppose that now that I have re-arranged the playroom/craft area and am totally worn down from all the work plus the nasty cold I am trying to ignore (and I’ve gotten some gentle nagging reminders) means it’s time to sit back and go through all the pictures – at least the ones from my camera – if Paul has any good ones, I’ll have to steal them later.

Then they logged into NORAD and checked on Santa’s progress before heading to bed.  An hour later, they were fast asleep.  I don’t know how, or why, but something tells me we’ll never get that lucky again.  (and incidentally, how come they never go to sleep that easily when we’re trying to “get lucky”?  Seriously!)

I was able to get the house all prepped for Santa’s arrival and start the brioche so that Paul could make the pigs in a blanket in the morning.  I got the table dolled up, and as if on cue, our neighbor Jack stopped by and brought us a beautiful arrangement:

Perfect for our table!  And with the girls sleeping so well, we were able to get into bed by midnight for once!

It was a busy day, but at least we got enough sleep -unbelievably we didn’t get prodded to wake up until almost 7:30.  Santa even set a brand new alarm clock next to Emily’s bed and programmed it to play We Wish You A Merry Christmas at 6:00 but she woke up, marveled that Santa had left her a cool clock, shut it off, and WENT. BACK. TO. BED!!!  I don’t know what kind of weird un-kid-like planet Emily comes from, but it got me some extra zzzzz’s, so I guess I can’t complain.  I barely got any pictures of them opening their gifts on account of how quickly they tore into them and how low the lighting was (for once Paul and I didn’t have the “what do you mean you are going to have every light plus the photo lamps set up and on before they can open their gifts?” fight).  But we caught a few happy moments, even with Oona, so wasn’t too sure what to make of the whole thing.

Once the wrap was gathered up and the girls were busily tearing every single toy out of its packaging and demanding batteries and instructions, Paul got to work making the pigs. 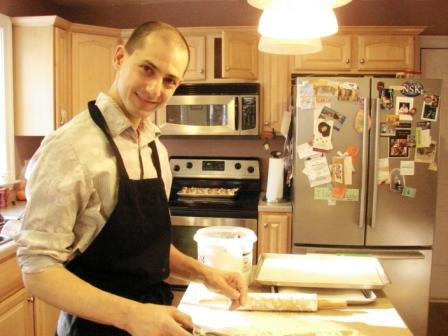 It’s a tradition for us – I make up a batch of brioche dough on Christmas Eve from  Baking With Julia and the next morning Paul rolls it out and wraps it around some Lil’ Smokies and voila!  Yummy pigs!

Neve likes to supervise so she can eat as soon as they’re ready.

Uncle Daddy arrived first and helped Neve open her new Bratz doll (yes, she got Bratz.  No, I don’t like them, but I also know better than to make a federal case out of it and turn them into forbidden fruit).

Neve LOVES hangin’ with her Uncle Daddy.  And he’s a good sport for letting her boss him around, which she pretty much did until my parents and sister got here.

Maddie proudly showed off her new togs – all from Hot Topic, and mostly Twilight related.

Grandma and Grandpa got Oona a Dancing Brobee!  (Check out her wicked bed head – she looked like some crazy anime character)

I was totally excited my brother came, but it took Oona awhile to warm up to her uncle KB (and everyone else for that matter).

Dad helped me out in the kitchen, thank goodness.  He is a total chef himself, and my uncle Eric is also a real foodie.  Both of them spend a lot of time watching Food Network and studying food prep techniques.  They’re both pretty incredible cooks, and as intimidating as you know that is, add to that my Uncle “Daddy” who went to the Julia Child school a few years back.  Try cooking while those three are in your kitchen!  I was nervous also because I was trying a new recipe from Williams Sonoma for stuffing to go with the pork crown roast I made.  It all turned out very well, though I did have to weather some jokes about how ill – equipped my kitchen generally is.  (I am totally taking steps to fix that, and mom and dad got me some awesome Wusthoff knives to help me on my way).   Anyway, just before we sat down to eat my SIL set out christmas crackers filled with whistles and crowns for everyone, each with a different tune, and then attempted to conduct some holiday songs. 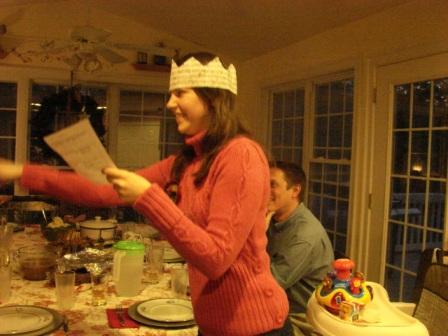 FYI: don’t expect those whistles all to work right or play the correct note.  It was a hilarious lesson in making the most out of the moment when things aren’t working right.

And then there was food!  Glorious food!  Actually I am getting pretty hungry right now just thinking about it.  Crown roast of pork (with gravy made by the Gravy Master himself, my dad), apple –  pecan stuffing,  potatoes mashed with parsnips, and creamed spinach, also made by my dad.  droooooooooooool……

The day was a success, the kids were happy, the families were well – fed and then there was this: 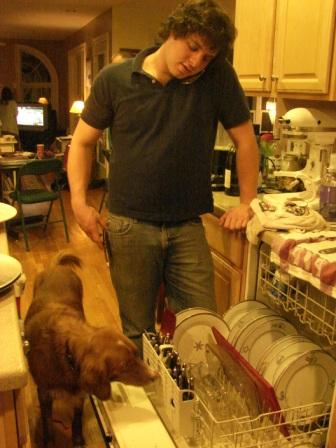 My brother.  In my kitchen.  Doing dishes.