I don’t know if it’s the airing out of the house or the whole “spring – ness” that is in the air, but the I’ve been pretty happy with how the last few days have turned out.  I am still suffering a bit with the stomach upset that plagued us all a few weeks back, but more or less I am well physically, and I am feeling a bit lighter and less weighed down than I have in awhile.  Oona is totally weaned and I am actually now below my pre- pregnancy weight. ( Really I don’t care so much about that, but I do want to firm up that middle mushiness that carrying three babies will do to you, especially since I got a new bikini for Mexico.)  That means a lot more options when I walk into my closet in the morning.  There’s not much that makes a girl feel better starting her day than that!

Oona now sleeps through the night, Emily’s impetigo is all cleared up and she’s back to school and we’re all back on schedule. The cloud of negativity seems to have lifted and we’ve been more productive.  Yesterday I managed to bake 2 loaves of homemade sandwich bread and whipped up a tub of dough for the fridge.  (We’re addicted to panini right now so we’re using a lot of bread).    I also made Auntie Anne’s pretzels for the girls.  ( I subscribe to Food Network Magazine and they had a copy cat recipe of those sinful pretzels from the mall and I just had to try it. )  I think my kids may have snorted them they ate them up so fast.  And yes, they do taste just like the ones you buy.  Score!

I also sent Neve to school in a peasant blouse I made for her and she looked adorable.  Emily got a new headband from a Heather Bailey pattern I downloaded  so her hair won’t look so funky anymore.    It was a good day to be the mommy of the house.  Today I continued cutting fabric for more spring and summer dresses for the girls and a halter top for me to take to the resort.  I’m hoping to pick up a set of bunkbeds this week for the girls so I can get everybody organized before summer hits and they are here all the time to get in my way complain about what I am doing slow up the process.

Today was chillier than the last 4 or 5 days have been so I decided to use the butternut squash and apples I had to make some soup.  Normally I only make this particular soup in the fall, when the apples are in season, but Neve loves it, and I have had a craving for it, so it seemed like the day to do it.   I don’t actually have a recipe I use, I kind of just “wing it”, which I find more acceptable with soups than most other types of cooking.  I knew what I wanted and grabbed the appropriate ingredients, and voila!  Yumminess!

First I chopped up a nice big squash. 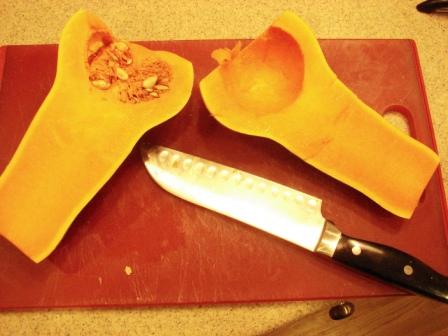 While I was chopping this up, Neve commented that the knife was pretty big.  I agreed.  Then she went on to say “But you know papa has a bigger wrench than that.  I mean a REALLY big wrench!” Which of course meant that I couldn’t stop chortling to myself with laughter, picturing the euphemisms that Paul is sure to take from that.

When I stopped giggling, I chopped up two large granny smith apples.  Then I added all the chopped stuff to a pot along with a stick of butter.  Yes, a whole stick.  No, I don’t think my recipe is on the low fat side, but I didn’t use any bacon fat or lard, and I figure it’s chock full of vegetable and fruity goodness, and plus it tastes really freakin’ good. 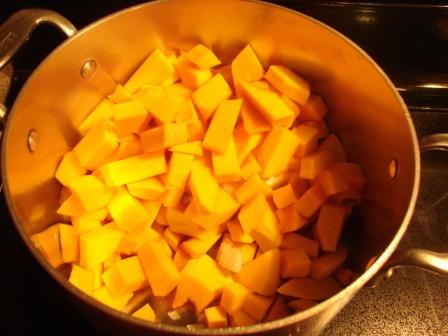 I love this part, because I turn the heat on medium high and let the squash soften with the apples and it smells SO good.   Once they are all nice and starting to get a little mushy (but not too much) I add some chicken stock.  Now, when I first made this soup I was using store bought stock, and it was still good.  However, last fall I started buying whole frying chickens from Sam’s Club for $7 and making my own stock, and let me tell you.  The difference, if you’ve never done it, is phenomenal. 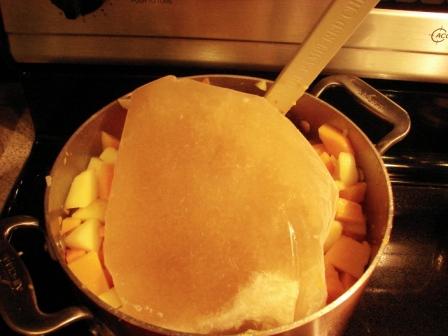 A big ol’ chunk of frozen stock.  I hadn’t had time to thaw it out, but I’ve found it doesn’t really matter.  I just let the whole mess simmer until the squash is totally softened and it just smells too darn good to resist anymore.  That’s when I whip out the immersion blender and puree it all.  I used to transfer it all to my blender, but that can be kind of messy and then there’s another thing to clean.   When it’s all smooth, try not to put your face in it like a hog.  (I myself have a hard time controlling myself). 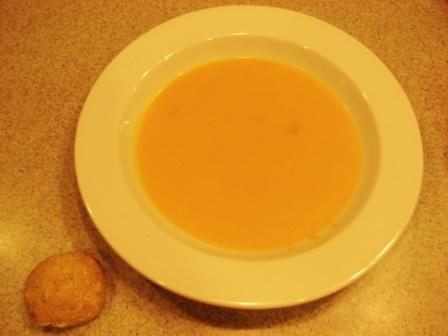 When I haven’t had homemade stock on hand I’ve also added onions to the first step and sometimes even a bit of apple cider to bring up the apple taste.  But really, this is one of those dishes that is better for its simplicity.  Just ask the 5 year old who slurped down 2 ginormous bowls of it tonight.

SO that’s my gift to you tonight.  A yummy and easy treat and a hope that all of you are having a positive and productive week.  Enjoy!