We got word that our trip to Mexico will be happening November 12 now, so I have 6 more months to make sure I can pull off a bikini.  Whew! Seriously, I am still rather mushy in the middle, and I was really just going to be “winging it” this week.

We managed a day out in Williamsburg without the kiddos (and Oona did fabulously with her grandma – she barely noticed we were gone).  There are some great outlet stores out that way – some are still way over priced, but we had fun looking around and having the luxury to be all casual and mosey about with no screeching and emergency potty trips.  For dinner we went to PF Chang’s, which is just this side of heaven, let me tell you.  I could eat their Mu Shu every day for the rest of my life and never complain (though my blood pressure might – it’s pretty sodium heavy).  The great thing is that the restaurant is at a really pretty outdoor style mall in Richmond and we spent some time after dinner at the Starbucks there watching people and their dogs go by (it’s a very dog friendly mall, despite -or maybe because – all of the very upscale stores there, like Louis Vuitton).  They had Louis Armstrong playing, it was overcast, the flowers were blooming, there were white lights strung in the trees,  I had my triple grande black and white mocha………..it was lovely and relaxing.

Now we are back to reality, however.  We’ve had rain for ages now, whch was great at first because the pollen has such a heavy presence on everything you could swear the world was going to be a gnarly greenish – yellow from now on.  Now that it has been raining for what seems like an eternity (actually I think it’s been like 4 days) it’s getting a bit tiresome, and this is coming from soemone who enjoys a good rainy jag.  I just want to get the kids outside and do some gardening without getting drenched.  And speaking of kids – they are done with school on May 22!  Time to get down to some serious mapping out of vacation plans and activities to keep them busy through the hot months!

I myself have been quite busy, though I do not have many pictures to show for it yet.  I finished the Summer Blouse from Weekend Sewing for myself yesterday, and since Paul cannot take a good picture of me to save his life (seriously – how do you make someone who’s a size 4 look obese?  Just ask Paul!) I had to take it myself.  So excuse the craptastic-ness.

The photo might be awful, but I love the blouse.  I had to add some length and take it in on the sides to make it fit right – the pattern has it rather short and boxy – but I am happy with the results.

I also finished the Everything Tote from the same book.  It’s HUGE.  I knew it owuld be a rather “roomy” bag, but I didn’t realize it would be HUGE.  I also had a bit of trouble getting the binding strips and handles to turn out the way they are written in the book so I had to improvise a bit.  Either way I am still rather pleased.  It’s always good to have a nice tote when you need it, and I love the Joel Dewberry fabric I used. 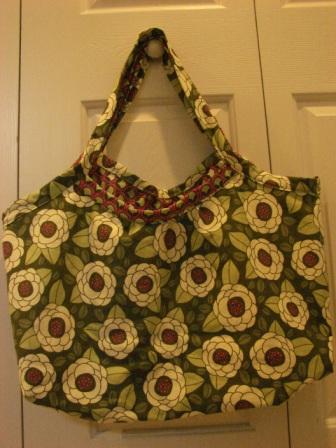 Other projects from the weekend include:

– dress and skirt for Oona

-strawberry layer cake from scratch.  The recipe is in this month’s Cooking Light.  It’s kind of old fashioned and perfect,  with pureed berries and a cream cheese frosting.

– got 2 new Japanese sewing books to drool over!

And finally, while Paul and I were relaxing at Starbucks we thought up a lovely plan for Neve’s birthday (which is at the end of this month) so as to avoid having to throw a big party again this year.  We thought it would be perfect to take her and Emily along with their best buds across the way (and their parents) out to Build A Bear Workshop for a bear – building party and then over to Cold Stone Creamery across the way and cap off the day at PF Chang’s for dinner.  But you know what?  That little booger said “no”.  She wants a big party at the house with the water slide set up.  And when Maddie chimed in that she couldn’t believe Neve wouldn’t want a day at Build A Bear and Cold Stone you know what Neve said?

If you like it so much you can have YOUR birthday there.