Now that I have a moment to breathe and check in, I can tell you how packed my last few days have been!

It all started last Thursday when I met part of my book club at a sushi restaurant to talk about an “extracurricular” book some of us had read this year: The Hunger Games.

It’s a trilogy that’s been out for a few years now aimed at young adults, but almost all of my adult friends have read it.  They’re making it into a movie coming out in 2012, so if you haven’t read it yet, I HIGHLY suggest you do!  I don’t know anyone who’s read it that did not like it.  Both Emily and I read all three books in about the same number of days.

And now that I have mentioned it, I am craving wasabi again.  Go figure.

Saturday was an early day.  Caroline and I took a class through the local Cooperative Extension dealing with processing meat birds.  I’ve been thinking for awhile I might like to raise my own meat chickens and turkeys for the cost and health benefits, but I’ve been squeamish about it and not sure I could actually do it.  When this class popped up it seemed like the perfect time to see if I was ready.

No, I didn’t take any pictures.

Yes, I did process a chicken all the way.

This is what it came down to: there was a chicken in a killing cone (the bird is put upside down in an inverted cone to hold it in place and keep it calm) in front of me.  If I didn’t kill it, there was a line of people behind me ready to do it.  So….I apologized and thanked the bird, and I sent it to its maker. After that the rest was easy.  Anyone who’s cooked a full chicken or turkey for dinner could easily have done it.

After the bird is killed (as humanely as possible, I should add), the head removed, and the blood drained, the carcass is scalded for one minute to loosen the feathers.  Then the legs are removed and it is put into a Whiz-Bang feather plucker.

With the feathers gone all that remains is to pull out the organs, wash out the cavity, and package it for the freezer.  This part took some practice, but Caroline and I cleaned out several birds and it gets easier every time.

All class participants got a fresh chicken to take home for their freezer.

As for the killing:  I am not sure I could do it if I had raised the birds from chicks.  Fortunately Paul is willing to do that part if I handle all of the cleaning.  Fresh, free – range, drug – free chicken is a beautiful thing, and with any luck we’ll have our own flock of them going in the early spring.  I can also tell you this: raising your own food (and killing it) makes you much more thankful and mindful of every bite you eat.  It’s very hard to mindlessly shovel it in when you’ve worked hard for it and an animal’s life is forfeit by your hand.

Sunday was also an adventure.  Susan had arranged for Caroline and I (we make a pretty damn good team, she and I) to drive to Manassas, Va to pick up her “Rent – A – Ram”.  Every fall, she leases a male sheep from another farm to breed with her ewes so we have lambs in the spring.

Paul built a fantastic crate to go in the back of the suburban, and Caroline and I were on our way to pick up Solomon, a beautiful Cormo Ram. Since it felt like we were cramming a Ram into the truck I got into the habit of calling it “Ram Cram 2011”.

It was a beautiful day and a beautiful drive up through rolling farmland (it killed me, every bit of it.  I need my farm already!).  We got Solomon and loaded him up in no time and were on our way with nary a hiccup.  We got him back to the farm as the light was failing and introduced him to his new pasture – mates.

I couldn’t have had more fun if I tried.  I didn’t get any pictures, though, so I blatantly stole this one from Caroline: 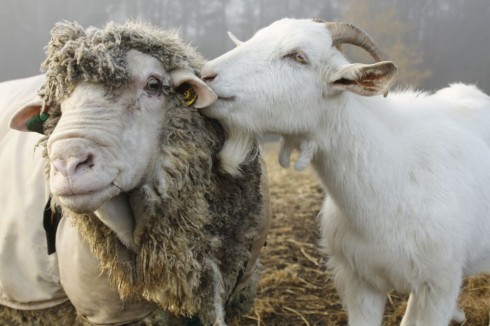 That’s Solomon being sniffed – up by one of my boys.  I can no longer tell Frodo and Finnegan apart.

2 thoughts on “Weekend Run – Down”