Have I ever mentioned that all of my front top teeth are fake?  I’m sure I must have.  They are all crowns, put in the year before Oona was born, both to make my smile nicer and also because my real teeth are pathetically soft and prone to problems.

When I was pregnant with Oona I had that awful condition where you want to vomit for nine months straight.  For the first trimester I lived with it, considering that with the first two kids the nausea subsided by about the fourth month.  But, after three months or so of constant sickness I had lost enough weight that my doctor became concerned and had me take a wonderful anti – nausea drug so that I could actually keep down food and water for myself and the baby.  The vomiting stopped, but the acid reflux and the nausea never quite went away.  You can imagine what none full months of stomach acid swimming around your mouth does to your teeth.  Especially when the taste of toothpaste makes you nauseous.

This is all to say that I wound up with cracks all along the back of the newly installed crowns.  They held up admirably the last few years, waiting to be patched and fixed and replaced as can be afforded (and let’s face it: who has enough money in this economy to be constantly dropping thousands of dollars at the dentist?).

This week one of my front crowns decided it had had enough, and while eating a mouthful of spaghetti, it cracked and fell right out.  Crown, tooth and all.  I was horrified.  I’ve had nightmares like this.  And here it was, fully realized.  I refused to let anyone see for more than a quick flash to prove what had happened, and was thrilled when I got an appointment first thing the next morning for a quick fix.  Fortunately there is enough tooth left in the gum that the crown can be saved (he used temporary cement to glue it back on for now)  and I don’t have to go for an implant.  UNfortunately, I have only the temporary save until the new molds and posts and whatnot can be done and so I have to be very, very careful while eating, lest I knock it back out.  Thanksgiving isn’t going to be easy. I have been very paranoid about it falling out again before my next appointment for the permanent replacement.

Teeth and dental issues are one of those things that make me unreasonably angry and fired up.  With all of the talk in the news about health insurance, where’s the push for better dental insurance?  Let’s face it, almost everyone I know has put off dental work because of the expense.  People sacrifice their teeth as long as they can before having them fixed. It’s not like teeth are unimportant to our health, either.  Wouldn’t it be nice if we got 3 sets of teeth?  The baby teeth, the set we grow as children, and another set in our 30’s?

When I haven’t been hiding my hillbilly-esque smile from the world this week I’ve been busy with some super – secret knitting. 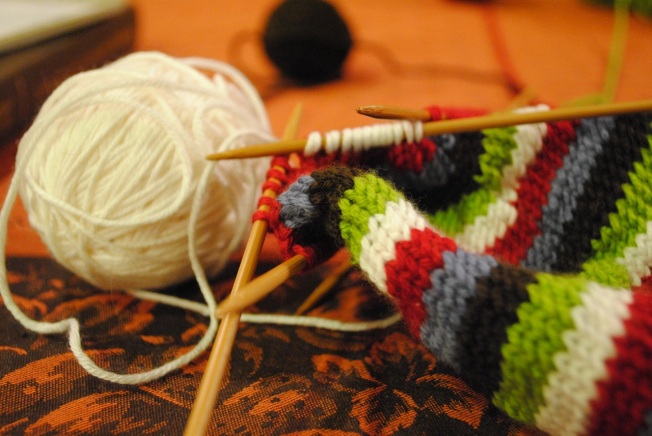 Between the holidays coming up and friends with new babies and friends expecting babies I am busier than ever.  I can’t imagine where I’ll find the time to get it all done; and I haven’t been over ambitious this year, either. 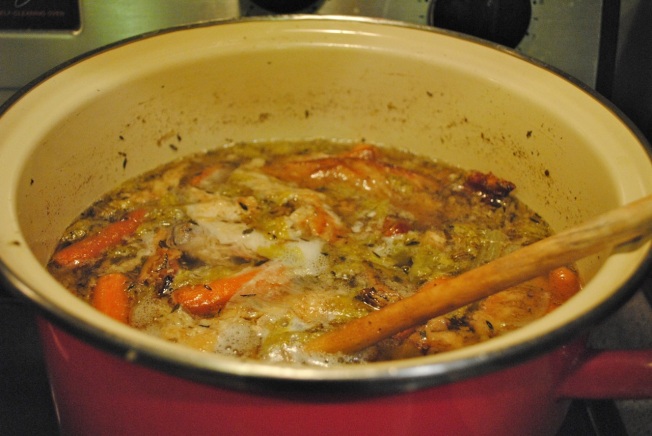 We’re also enjoying cozy season by bubbling large pots of chicken carcases to make stock.  I love the way the whole house smells after a day of slow – boiling the chicken with herbs and vegetables, and it’s most enjoyable to sit by the fire and knit all day while it simmers and sizzles on the stove.

Oona likes cozy – season food as much as I do.  Soups, stews, pies.  Tonight I am making a chicken pot pie and she is more thrilled than you could believe a four year old would be for such a thing.

These are definitely the days I live for.   But with better teeth.

One thought on “The Tooth of the Matter”