Well I’ve been husband – less for the better part of the month, and as we prepare for his imminent return I’ve been taking stock of how things have held up over the past couple of weeks. I think I’ve done pretty well, if I do say so myself. The house looks pretty darn good for only having one responsible adult and 3 small children (plus all the pets).

I’ve gotten a lot accomplished as well, given the circumstances. I painted the play/craft room and moved all of my “stuff” into it. I even got some stick – on “stained glass” for the palladium window over the kids’ toys:

Check out that color!!!

I’ve gotten the kids to the pool twice – I would have gone every day but it costs $20 every time we go. Each time when we left I had 2 screaming girls who wanted to stay in the pool “forever or at least every day”.

I’ve managed to feed them all decent meals and I’ve gotten to do yoga on Wii Fit every day (I make Emily help with Oona….)

And I’ve taken a break from knitting to do some sewing. Yep. I’m hot into sewing right now. I made quite a bit recently, including an orangey shirred – top dress for Neve:

And I had to make one for Oona to match:

I’ve also made a few things for me but I have no pictures yet. 8 and 5 year olds don’t make the best photographers unless you want a more “abstract” theme. I also have a quilt I am working on with some awesome fabric that has cute little VW buses on it. It’s perfect for us, of course.

The vegetable bed has exploded in the last week, since we’ve had tons of humidity and rain: 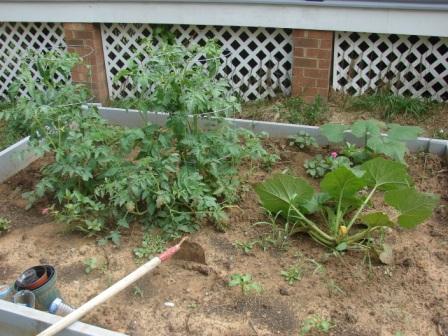 I have a few yellow squash coming in, and the tomatoes are budding like mad. Unfortunately the japanese beetles are also back, and swarming like you wouldn’t believe. One of them traveled into the house in my hair yesterday and nearly gave me a heart attack. Speaking of which – we seem to be working on a 2 spider per day average. Happily they have not been too large, but they have been quick and I don’t like them either way. They’re probably after the colony of fruit flies that has taken up residence in my kitchen sink, despite all efforts at total cleanliness.

I’m happy to see that Ice Road Truckers is back on. The only disadvantage to being up in the craft room all the time is there is no satellite up here. I will be needing to remedy that. Can’t miss my Discovery and History channels, after all.

All in all things have been busy and active despite the lack of going anywhere much and pulling in all the spending reins to save cash. Gas and food prices being what they are has had me budgeting much tighter lately. I don’t go to the grocery store without a list and a full out plan for how we can eat well yet cheaply for as long as possible. It seems to be working fairly well – today was the first day I did a big grocery shopping in two weeks and we were still in decent shape. It does mean eating hot dogs for lunch and spaghetti for dinner more often than we’re used to, but hopefully we’ll get a bumper crop of squash and tomatoes this summer to throw on the grill!

One thought on “Sew Hot In Here”