You know you’ve crossed that line into “farmer-hood” (is there such a thing?) when you are out in the still -wet grass at 6 in the morning in your jammies before daylight has even fully broke chasing around an errant rooster.

That was Emily and I this morning.  P-Roo made a break for it, heading under the back deck and refusing to be moved.  I would have just let him be since I don’t think he’ll wander too far from his hen harem but as we were expecting rain and thunderstorms all day I did not feel like trudging back out later to get him.

Earlier this morning (before the wild – haired, flimsy pj’s flapping in the breeze, shoes slick with dew and causing a few near – spills in chicken poop and wet grass episode) I had discovered Neve to be sick with some brand of illness, running a fever and coughing.  I therefore kept her home today.

I was a bit worried about keeping her home – usually she ends up being far less sick than initially suspected and  runs circles around Oona and I all day.  I needn’t have worried (well, at first anyway).  She was mellow all day, lounging in front of the tv until Oona fell asleep around 3 and Neve crawled into bed beside her.  Her fever was up rather high at that time so I gave her some childrens’ ibuprofen, and she’s been driving me crazy ever since.

At one point she marched down the stairs wrapped in a colorful snowman blanket said , “Mama, who am I?” and posed imperiously for me to guess who she was pretending to be.  I couldn’t think of anything other than “A princess?”, to which she shook her head, rolled her eyes dramatically and very condescendingly informed me she was in fact “the Grim Reaper”.  Duh.  Barring a return of the fever I think she’ll be going back to school tomorrow. 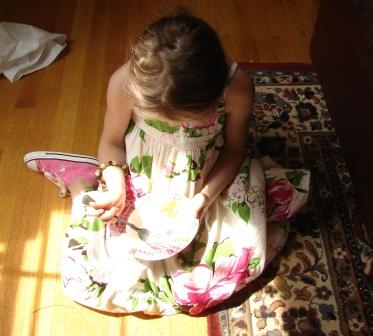 I love the flowery dress with the Chuck Taylor sneakers.  That’s my girl!