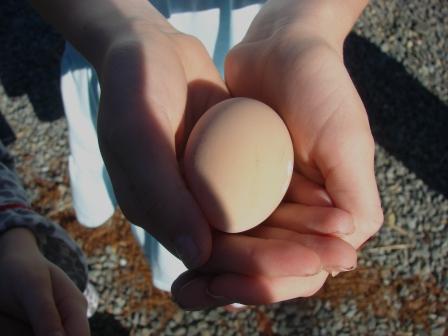 It’s a small thing, to be sure, but its potential is great.  Not only for the life inside of it (well, actually Emily at that sunny side up this morning) but because it means I at least have ONE laying hen!

I know Turkey Day has passed already but as I have some pictures to share and I am still so excited about our first egg yesterday I feel compelled to share my gratefulness!

For those of you who know use or who are regular readers, you probably already know that we are “cursed”.  Not that I am sure I really believe in the whole voodoo/black magic/stink-eye kind of stuff, but more along the lines of thinking that Mr. Murphy had me in mind when writing his law.  Anything and everything that can go wrong, will.

*We ordered a part for my car so that it would pass inspection, but the seller took well over a month to ship it out and now my car is way past due.

*We bought a bus in great condition and a decent price (but not so decent that it should have anything major wrong with it) only to have it break down just south of the capital beltway a month later.

*I brought home 6 adolescent female chickens only to have 4 of them turn out to be boys.  Add this to the fact that half of the chicks I bought in March turned out to be roosters as well.

*Oona turned off the chest freezer this weekend and no one noticed until all the food thawed and the frozen berries leaked dark red juice all over the wood floors.

*I had this post 100% written and ready to go and when I clicked on “Save Draft” it deleted it instead.

You get the idea.  This is just my life, day to day.  We have accepted this and try as much as possible to plan for all of the failures.  It tends to make one grateful for all of the little things; sometimes little victories are all you have.  BUT I do have 3 very significant victories – all 3 of my girls were born healthy, on time, and without complication.  I’ll take a lifetime of Murphy and his bad luck if that’s the payment required.

And with all of that in mind, on to Turkey Day! 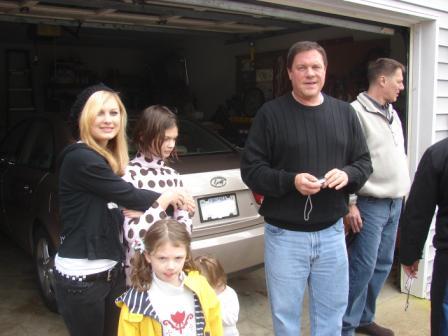 Over the river and through the woods, to grandmother’s house we go……

It was funnier when we actually did have to go over a river and through the woods to get to my mother’s house.  Now it’s really just “down the road and through the gates”.

Emily dressed herself all in polka dots.  I wouldn’t do that, I promise you. 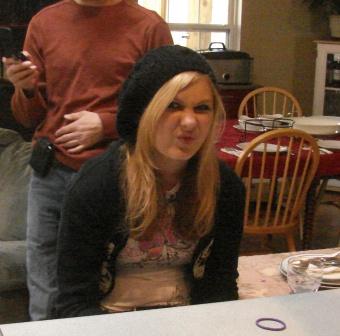 I’m thinking that if Maddie sees enough of these pictures of herself on the internet she might stop making that face. 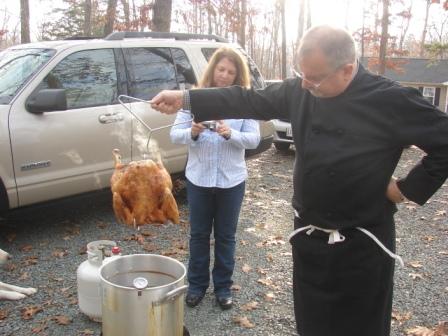 Eric made the fried turkey, as per tradition. (And pumpkin creme brulee – the likes of which shall haunt my dreams forever).

Master chef dad, whipping the potatoes.  I am starving just thinking back on it.  My brother will be happy to know that this was the first year we did not run of out masjed potatoes.  Dad said it was because he made “an ass load of them”.  And yummy they were, with the mashed squash (acorn?) stuffing with sausage (oh droooooooool) green beans, gravy………this is torture. 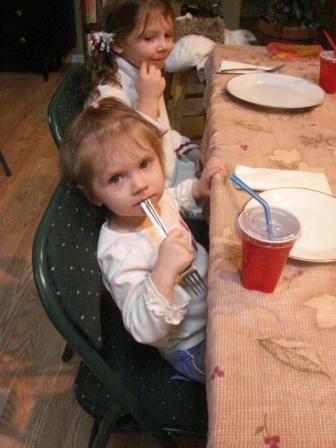 My kids gnawed on the drumsticks, caveman – style. 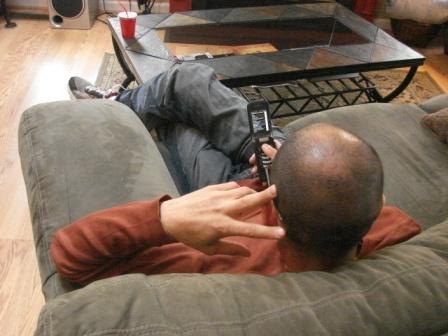 Paul was……..Paul.  Actually, to be fair, that’s my Blackberry he’s messing with there, not his. 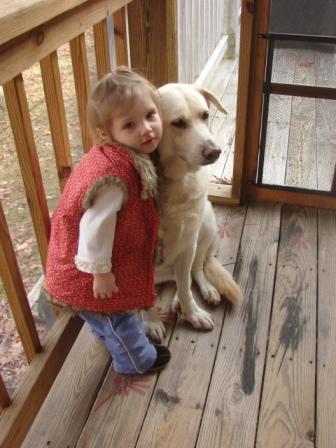 We ate so much food that once the dessert was passed around and squeezed in all we wanted to do was lie down and sleep.  I think we were all in bed by 8 that night.  I didn’t want to eat again, ever.  But now that it’s been a few days and I am thinking about it again I think maybe I could use another such feast.

Hey, dad?  Want to whip up another feast for me?