I know I should have posted this ages ago, but between the turkey – induced sleepiness and the craziness of the weekend that followed I just have not had the time.

Turkey Day managed to be an enjoyable day for all of us,even the middle and little ones.  Those little turkeys started off the festivities wearing pilgrim caps we had made in school while watching the Macy’s Parade (am I the only one who wants to say Enough with the stupid side acts and just let me see the damn parade and floats go by!!!)?? 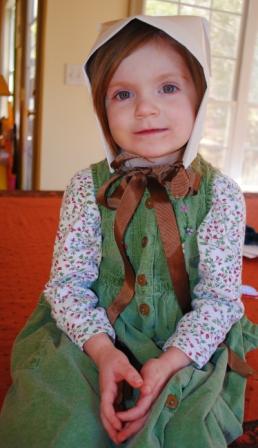 We ate at my parents’ house, as we try to do every year.  My father happens to be an amazing cook, so it’s kind of a no – brainer.  No canned yams for us, thank you very much. (In no way do I mean to denigrate those who enjoy canned yams…….I just don’t).

As always, there were two turkeys: one roasted, one fried. 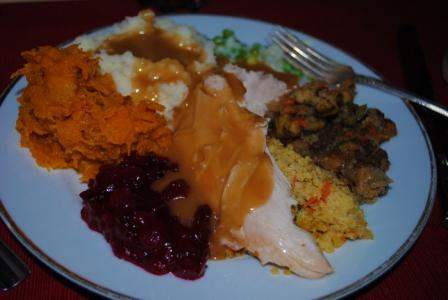 Maddie kindly made the apple pie so I didn’t have to (SO glad I taught her how to make those!) ans Uncle Eric made several pumpkin pies.

The girls love sitting by my mother’s fireplace because it’s REAL.  Hear that all you new- home builders???  REAL fireplaces are superior to gas!!! 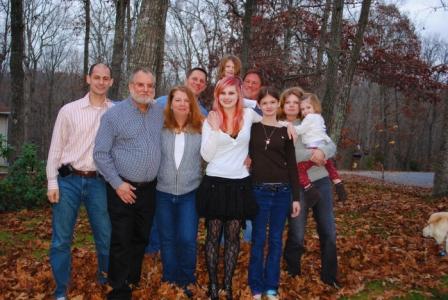 Hard on the heals of turkey we had a sleep-over with the kids and their friends and a big cleaning to finish so the tree and other holiday decorations could go up.  I still haven’t come up for air just yet.  I had planned some nice relaxing knitting to keep me sane, but the cowl I was working on with Juniper Moon Farm yarn turned out to have gotten twisted on the circular needles after I’d gotten about 3 inches in (that’s a lot, considering it’s 44 inches around, plus the 3 inches wide) so I had to undo it all this morning.

I’ll cast it on again later.

Although, I think that may be what got me in this mess to begin with……