We are all holding our breath these days, just waiting for the inevitable return of winter.  We’ve had several recent days where the sky was grey, the temperature was frigid, and the air felt and smelled of snow.

Like every other year, this is where the last minute scramble to be prepared kicks in.  On one of the last warm days I tipped out the water tanks and hosed the hay and leaves and bits out of the bottom.  Of course it looks today as though I didn’t do anything at all, but at least I tried, right?

I’ll be freshening up the pigs’ barn with a layer of fresh hay to root through and burrow into on cold nights.  The bees have been supplied with sugar water as an extra help for the winter (though honestly they made plenty of honey for themselves over the spring and summer and I didn’t remove any from them).

There’s still plenty I’d like to accomplish (some fencing around the strawberry bed, for one) but as every other year, it’s a race against available time and impending cold.

We’ve also been doing our best to keep Cini in the house as much as possible.  His old bones get achey in the cold and he’s looking too skinny these days.

Keeping him in allows me to feed him extra treats throughout the day and know he’s snuggled up warm by the fire at night.  He’s not too crazy about the arrangement.  He still makes a mad dash for the door whenever it’s opened and will then take off after the first deer he sees. But happily, he has found a small friend in Piccadilly, who loves to rub her face on his snout and play with his giant paws.

Outside the leaves are nearly down from all the trees and it is looking very much Thanksgiving-y. 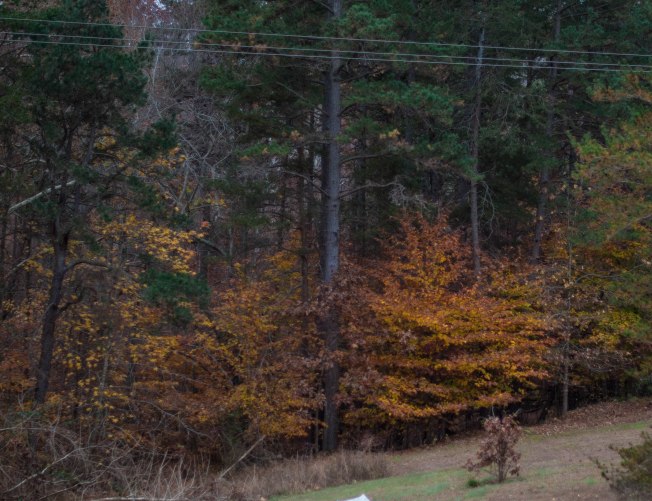 Except…..I was surprised to see this:

As lovely as it is, my favorite right now is the Beauty Bush:

I’m thinking I need to dye some yarn in these colors. I also should have bought about 30 more of these bushes when I planted this one, years ago.

Speaking of yarn…..I’m done with my secret baby knitting project!

It needs a blocking and to be sent off, so I will save the details and good photos until it has arrived in the hands of its recipient.  I will say that it was very enjoyable to knit and I used JMF Sabine.  It was knit in bits and spurts mostly during school mornings while the girls were working on reading, or their new project, art journals.

Neve enjoyed working on her title page, which was all about her and the things she enjoys.  However, when I gave them the task of dedicating a page to all things “November”, the results were less than enthusiastic from my middle child.  It was mostly just a statement written out.

“November is a pointless month holding up time between Halloween and Christmas”.