It’s officially autumn now, and today it certainly feels it. It’s rainy and chilly, and the trees are showing the faintest hints of changing color. Only one mum plant from last year made it to this year, but it’s my favorite color, so that’s at least something!

I bought two more in orange and yellow; hopefully I’ll get around to planting them soon!

It’s also time again for me to play with yarn and dyes, and combined with all the baking I’ve been doing, the house smells of wool and cinnamon. It’s heavenly! 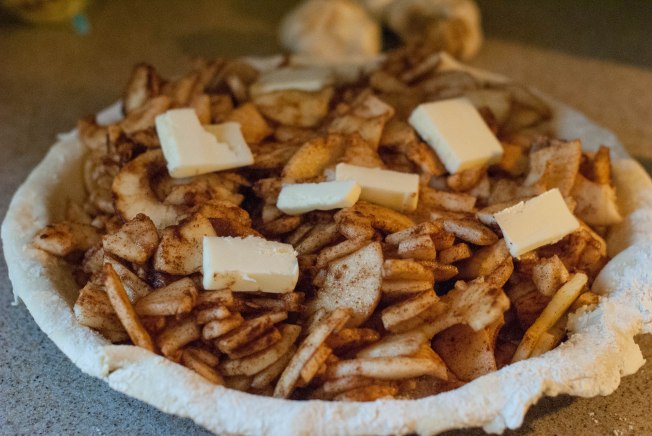 Apple pie is most definitely our favorite treat this time of year.  As always, I use Smitten Kitchen’s All Butter, Really Flaky Pie Dough.

As for the filling, I sprinkle dry tapioca on the bottom crust, and toss in chopped apples mixed with cinnamon and sugar.  Add some dabs of butter, cover it with a second slab of crust, and voila!

We’ve been hogging out on the pie and my Butternut Squash and Apple Soup.  Last night I changed it up just slightly by adding a teaspoon of boiled apple cider along with everything else. It added a whole other layer of delicious.  The combination of all these things makes for such a lovely, cozy evening.

But, though it’s not all doom-and-gloom around here, it’s also not all rosy and rainbow unicorns, either.

We are still trying to raise as much as we can to better contain the dogs.  Orzo has an appointment for a neutering, in the hope it will quell some wanderlust (and make him gain enough wait to not be able to clear a 6 foot fence anymore!).  Paul is in talks with a few folks for estimates, and we have made a campaign of aggressive friendliness while out walking the dogs.

Now, let me ask you: have you ever tried walking dogs that have spent their whole lives off leash? It’s getting better, but my first efforts were nothing short of epic disaster.  CIni is 12, after all. They all sort of had this reaction of what fuckery is this???

Cini and Lucy flat out refused to do their “business” while on the leash for the first two days altogether, and there was quite a lot of cleaning up to do in the house from that debacle.

It’s getting better with them, but Lucy is still pretty upset about the whole thing and regularly digs in her paws and refuses to move.

But we’ve been doing our best, and trying to greet as many people as we can with them.  We already know quite a lot of our neighbors who are wonderful, but we’ve seen a few out and about we haven’t met yet. A couple have been unfriendly and refuse to wave back or acknowledge us; but they’ve been few. Oh, humanity. You’re a crazy, messed up, beautiful, awful thing!

Our nearest neighbor told us she misses having Lucy keeping guard over her and her dogs; Lucy, for her part, seems to miss them as well, and keeps pulling me hard to get over there to greet them.

Sabine and Orzo are firmly chained up at the moment. We have no idea how else to keep them close while we await fencing options. They are not happy at all; Orzo has been whining and barking non-stop. Sabine just seems defeated.  It breaks my heart. But, they have shelter and access to food and water, even if they are unable to chase off any threats.

I’m cautiously optimistic; we’ll figure out something. In the meantime, we are hoping to keep some donations coming in so we can be sure we area able do things right!

And, lest you think it’s only the dogs that are tough to contain, I leave you with this hilarity: 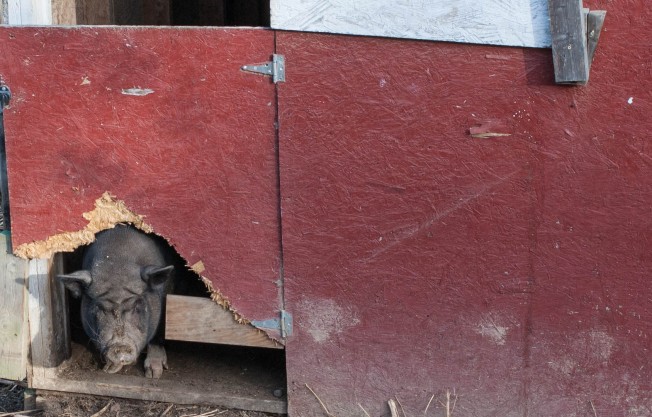 For donating, go HERE, or click the button on the right side of the page.

One thought on “Autumn Delights”