After two full days of high winds and heavy snow, the sun woke us this morning, bright and blinding over the deep blanket of snow.  I’d say we got at least two feet; in most places it is knee deep, and the drifts between the cars are at waist-deep (and I had to chase a loose hen through there).  We are all impressed that we never lost power, though who knows when all the schools, etc, will re-open.

Sadly it wasn’t only the sun that woke me this morning, but a terrible cold that’s left me achey and miserable.  Good thing I managed so much work yesterday and could reasonably relax today (though I will admit to having done all of today’s chores and feeding in my pajamas, in a sickly, Cold & Flu Alka-Seltzer – induced haze). 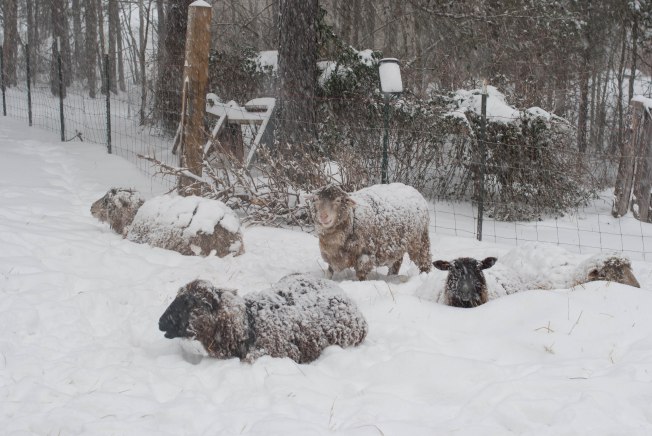 Yesterday there were points where I did begin to worry about the sheep. Not because they had no shelter to escape the snow, but because they had no interest in availing themselves of it. They simply took turns gorging on hay and laying in the snow to chew their cud, allowing it to build up on their backs.

Sabine and Orzo weren’t exactly thrilled about being out in it, but they spent enough time running about in it that they kept the area around the hay bale and feeders rather packed down and easy to access.

Oona braved it for longer than anyone. It was pretty hard to see with the wind blowing the snow directly into our eyes, but she loved it.

I just couldn’t believe how heavy and for how long it snowed; I haven’t seen winter weather like this since I lived in New York. Not this intensity, anyway. I love this kind of weather, and I know how crazy a lot of people think I am for it. But I will tell you this: if we reliably had snow like this that stuck around, I’d be investing in cross-country skis.  I miss that!

I’m loving this view from the living room window.

With the weather outside so…..frightful (ha!)…..I did what any sane person (who loves to eat) would do: I made cinnamon rolls. As always, I used Susan’s recipe, because it’s fool-proof.

I’m so glad I did, too.  Waking up feeling like the back of a bus this morning was made somewhat better when I simply had to pop a roll in the microwave for 10 seconds and I could console myself with a delicious treat.

The cats spent the day watching all of the birds out at the feeders.

And THIS, my friends, is a happy man who worked very hard and fixed his tractor.  He’s currently out plowing. We did discuss wishing we knew for sure who the neighbor is that threatened our dogs (we’re pretty sure, but not 100%), so he could plow everyone else OUT, and him IN. 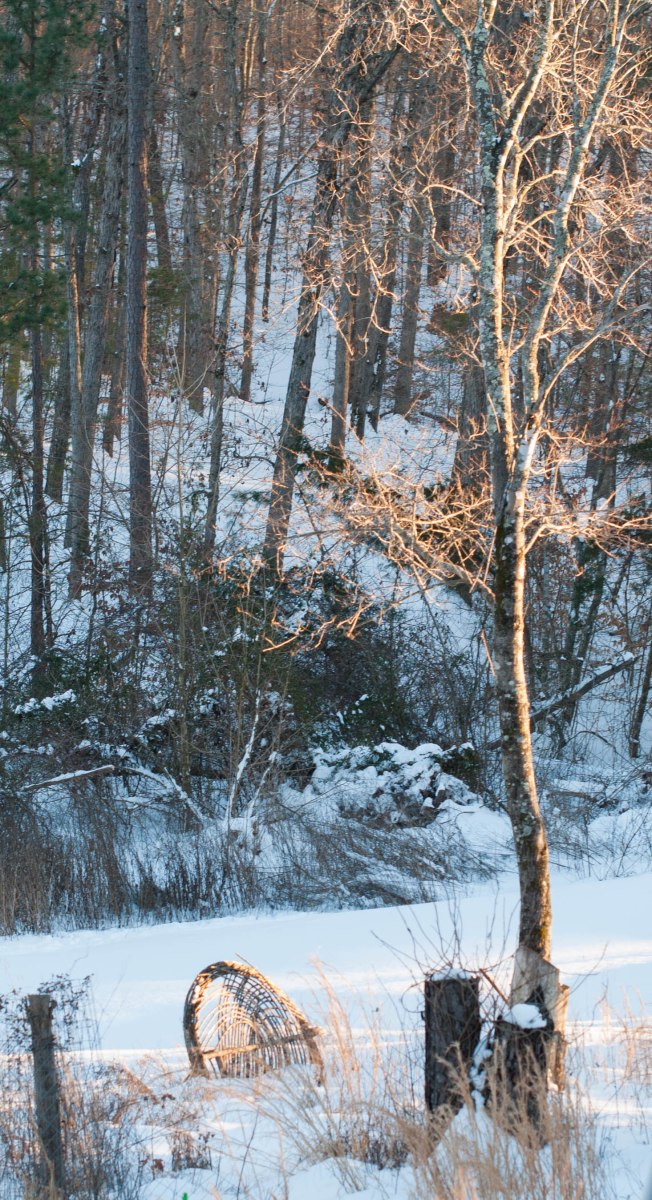 He’s out there anyway. Most of the neighbors will be very happy and thank him. Some won’t. That’s life, and people, I guess.

Either way, I’m grateful it’s him, and not me. I need to sleep off this cold virus.

Right after I enjoy how still, and clean, and fresh everything looks and smells. Breathe it all in, everyone. It’s fleeting.

3 thoughts on “Snowed In”