Our post-holiday hibernation has begun.

On New Year’s Eve we went to a beautiful wedding – our dear friends Heather and Terry. I don’t think I’ve ever seen a more beautiful wedding. I also cannot conceive of a better way to have ushered out the old year. Maddie and John were there with us, and afterward we waited for midnight and welcomed 2017 (and let’s be honest, told 2016 to go f*ck itself) with our friends the Stowells.

The next day I took down the tree and hauled it out to the flock to snack on.  It was a bit of a wet and muddy start to the year, and though I’m out making sure the shelters are dry for them, it’s just been too gross out to do much more with them lately. It’s likely too early to be able to check for any kind of udder development, and they’re not too keen on being chased around anyway.

I am enjoying the winter light, though, and the cozy feeling inside.  This time of year all I want to do is bake bread, and in the interest of hygge and making winter enjoyable for everyone, I’ve been doing just that as much as I can.

We also decided to make Orzo a house dog. He simply could not be contained on our property, and hasn’t seemed to taken to the guarding life. He’s more of a chaser – which is great if you have tons of acreage and another dog or two to stay with the flock . We simply don’t have the land for that, and he never seemed happy out there. So, we cleaned him up and brought him in, and though I think he’d still rather be outside roaming, he has adjusted to being an indoor pet, and is for the most part very chill.

He’s filled in right where Cini left off. He loves the cats and they love him. He and Pippa get along just fine. He’s also mostly adjusted to being walked on a leash.

Except that we got a few inches of snow this week. Just enough to be a light covering, melt slightly, and refreeze into ice. When I took him out the other night, as usual, I brought a heavy maglight  flashlight and let him do his business. On the way back in, I started up the stairs to the back deck, and he…didn’t. He pulled to my left, away from the deck, and I slipped on the icy steps, and fell into the shed and bannister. My ring finger got caught and smashed under the weight of me plus the maglight. And broke.

So that was fun! I’m in a splint for 4-6 weeks while it heals. Paul’s been on Orzo walk duty since, and Orzo’s made himself snuggly for me in the meantime.

And yes! I did mention snow! 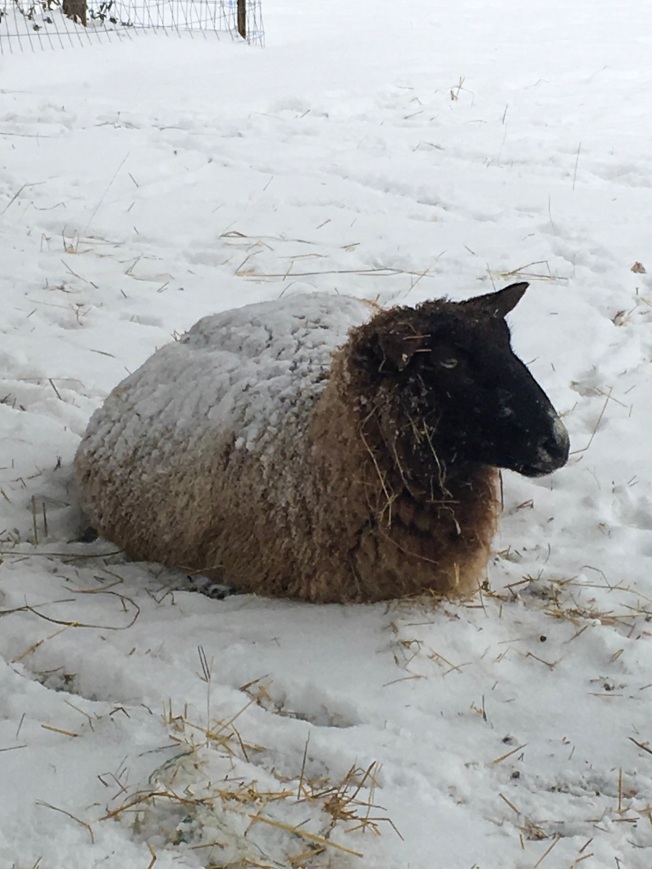 Not much, just a couple of inches. Still, enough to be lovely. 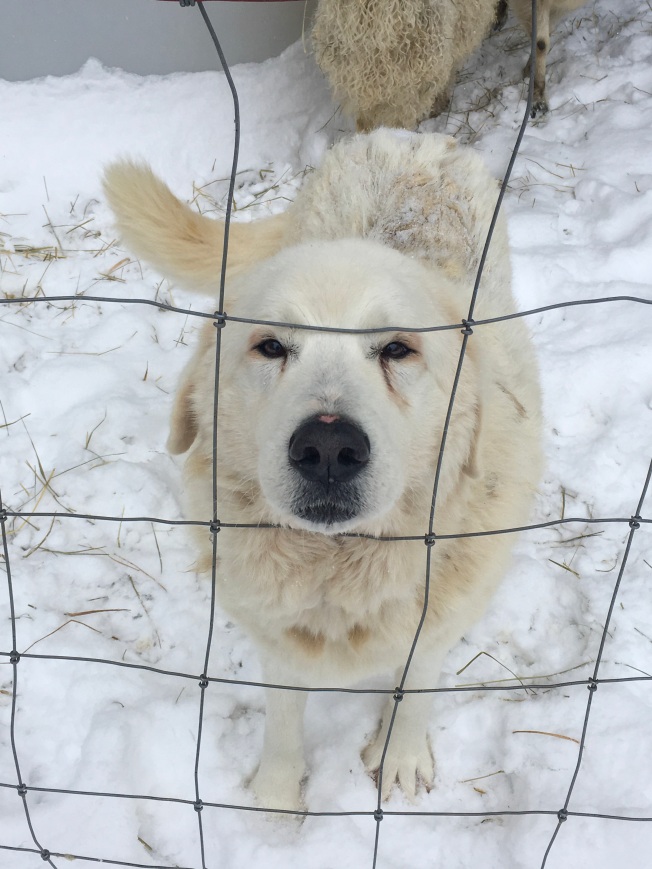 As for Sabine, she doesn’t seem fazed at all that Orzo isn’t out there with her. She’s always slept among the sheep and stood guard, even when Orzo beckoned her to play.  She is a true guard dog, and bonded to her flock. And she loooooooves the snow! When it was falling she was rolling around in it and looking quite pleased. Given the choice between her shelter and the snow, she’ll take the snow, every time. Hopefully this won’t be the extent of our winter weather this year!