It feels like a Monday, though, thanks to the long weekend.  It’s raining, it’s dark, it’s gray, and I’m achey all over.  Feels like a good day for sweatpants and a book.  Thank goodness it was such a long and productive weekend!

It started (and actually pretty much ended) with the back garden.  If you’ll recall, I had asked for a large patch out back to be tilled up so I could plant all of the large squashes in a place where they’d have room to spread.  Then I thought maybe some humble chicken wire could be placed around it a bit to delineate it and keep it free from four wheelin’ kids (hey, we live in teh country….it happens now and again).  You know, nothing fancy.  Most of you will know better than that, though – my husband cannot ever do anything simply and easily.  Not that I am complaining this time.

The problems with my simple garden patch started when we began clearing out the land and getting ready to till the earth.  Paul had assured me it would be a “piece of cake” getting it all turned up and he could haul down the remains of the giant dirt/compost pile from out front all with the Bobcat.   Then the Bobcat broke.  We looked into buying a tiller outright to hook onto the non – operational gravely we have (and then we’d have to buy another gravely for parts…..starting to get the picture of how things work around here? ).  That turned all of one weekend into a total bust.  Then we rented a tiller from the local hardware store and spent the weekend trying to make it work like it was supposed to.  No such luck.  The earth still needed a serious amount of work before any planting could be done, and as it was nearing the end of May, I was beginning to panic, especially when Paul informed me that the leftover dirt and compost mix pile was not going to be enough for this project.  So on Saturday I placed a call and ordered 6 yards of compost to be delivered.  In the midst of that phone call Paul up and left for his friend’s place – to borrow his tractor.

Now I know what y’all are thinkin’.  (Notice the “southern” I threw in there?).  Most men’ll lend out their wives sooner than they’ll lend out their tractors (at least, that is what my husband tells me.  Hmmmm.  Maybe I best not let him buy his own tractor……..).  But anyway, Mike is a really good friend.  We’ve known him and his family since we moved to Virginia in ’97.  So Paul borrowed his tractor, and voila!  Tilling done!

Now that my simple garden project had run into weeks and weeks of “how do we get this all tilled up?”, all that remained was for the compost to be delivered and a makeshift boundary to be put around it.

Makeshift is forbidden in these parts.  I would’ve gone totally rustic (bordering on ghetto, I’d say) if left to my own devices.  Paul had other ideas.

Heavy duty wire, heavy duty posts, majorly heavy duty dog – pen gate (I won out on one piece – I secured them all together with nylon wire ties rather than bailing wire.  It was easier).

The resulting garden spot is much more “high – tech” than I originally envisioned, and Paul claims I seriously owe him one for all of the work he put in.  But, you have to admit it came out really great.  An added bonus is we’re able to let the chickens roam freely in there and they’re relatively safe.  Call it a chicken playpen if you will.  Once the veggies have come in the chickens will be my natural pesticide.  They are quite efficient bug vacuums.

The compost came yesterday and I spent the later part of the afternoon raking it and getting my seeds planted.  Back – breaking, but rewarding, work.  There’s sugar snap peas, green beans, sugar baby watermelons, butternut squash, cucumbers, petit pickling cucumbers, sugar pie pumpkins, lumina pumpkins,  regular pumpkins, and birdhouse gourds.  The chickens followed me the whole time.  Maybe they like me after all.

Amazingly I still made time to turn out several loaves of sandwich bread, dinner, and a lemon tart.

I know it’s an awful picture, but I had to share.  I am in love with this burger and I may have to run away with it.  It’s smothered in barbeque sauce and cole slaw and topped with chopped dill pickles.  Mmmmmmmm. 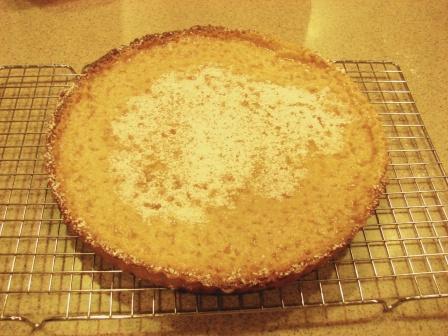 A lovely lemon tart.  Actually it was very bitter.  I couldn’t find any Meyer lemons locally, and clearly the ones at Food Lion are inferior (as is just about everything one gets from Food Lion).  Otherwise it was a complete success texture – wise and crust – wise.

Now I am sore and lazy and tired and I am going to spend the rest of this dreary day with some coffee, a book, and, if he’ll let me, this guy: