Well, she sure was sweet and cute – a tiny little peanut baby, on the very low end of the size spectrum.  At first she was much, much easier than Emily had been as an infant.  We should have known that meant we would pay during the toddler years.

She was walking way earlier than I would’ve liked (10 months) and she was into everything. Like the huge wad of Feline Pine she choked on at around 8 months.  Or the time she was about 2o months and woke up in the middle of the night and wandered out of bed by herself and climbed the bookcase and made a mess of the books before emptying the contents of the dishwasher onto the kitchen floor.  We woke up to the sound of clanking silverware.

She only grudgingly gave up her pacifier (paci) when she was about 3 and a half.  Until then it was her constant companion and plaything.  Occasionally she liked to throw them in the toilet to laugh at the splashy sound it made.  She also found it handy to stick her paci in the dog’s mouth when the dog was being too whiny for her taste.  At age 2 it became increasingly impossible to keep a diaper on her.  This is how I ended up with a pile of Neve poop on the coffee table in the living  room one fine afternoon.

That’s not even the worst of what she managed to put me through at that age.  Once she had her hands on something it was hers, and I had no end of trouble removing bills, checkbooks, toilet bowl brushes and more from her tenacious grip.  Her favorite place to steal from was the bathroom – she knew my makeup was in there and she did her best every day to try to climb up to get it.  But that is not what she was getting into one day while I was preparing her lunch.  I turned my back for half a second and she was gone – into the bathroom, where I assumed she’d be after a mascara or lipstick.  Instead I found her humched over the garbage can, fist clenched tightly around………a used condom from the night before. I reflexively went to snatch it out of herhand straightaway, absolutely horrified.  So she pulled back even harder.  I yanked again and she let go.  The latex snapped back at me, splattering its contents all over my face.  She laughed. 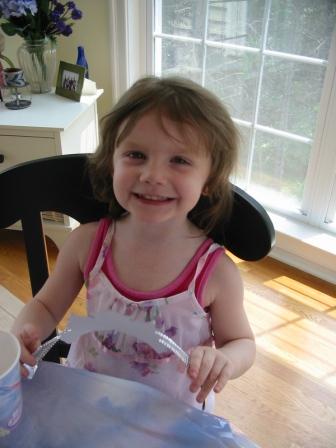 When we moved into our current house she was about 3 and her speech was rapidly advancing, and she was articulating the world around her in new and hilarious ways.  At night she wore her “Joe-Mamas” to bed.  But she wouldn’t sleep alone because she watched enough Scooby Doo to worry that there might be a “Grampire” living in her closet. 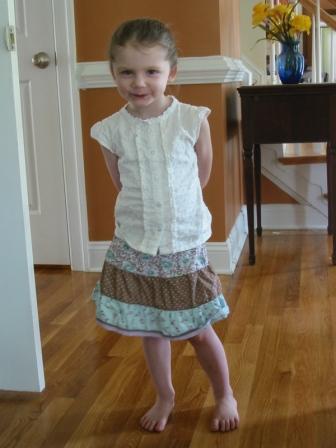 Her “My way or the highway” attitude was noticeable early on.

As was her unique sense of style, which we have dubbed “Baglady Chic”.

With her we have weathered some of the most unbelievable messes of marker and paint (both on her and the white carpeting), make-up and bodily waste. 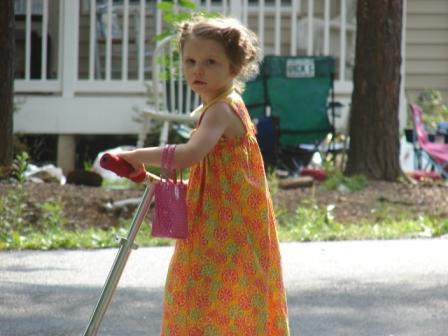 Thanks to her fearless daredevil outlook she has experienced more than her fair share of trips to the ER (both for her AND for the time she fractured Emily’s finger by slamming the shower door on it).

She excels in exasperating me on a daily basis with the constant criticisms and questioning of my every move.  Ane when I have heard “MAMA???” for the umpteenth time and I break and yell “WHAT??!!!” she knows how to break me down even more by pausing and responding “I love you.”

She can be the prefect little princess; sweet, cuddly, polite.  She behaves marvelously at school and with family.  She can charm the pants off of strangers at the store (when she’s not screeching and throwing her usual tantrums that is). 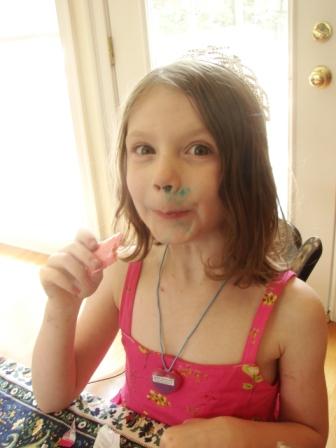 and turning herself blue by picking her nose with a frosting covered finger during her birthday photo shoot.

Happy birthday my little Schmoopie.  God help us all, you’re going to take this world by storm one day.

2 thoughts on “The Master Manipulator is 6”