There’s not a whole lot going on besides the usual craziness.  Paul bought yet another box truck so he wasn’t home this past weekend and I barely escaped Saturday and Sunday with my sanity intact.  The kids have been bugging me non stop to take them over to the community pool, but I just don’t have the energy to pay $25 and haul all of our  crap over there; especially when we are not allowed to have floaties (not cool when you have a toddler to wrangle) and there’s really only about 30 minutes of swimming per hour (they make everyone get out every 15 minutes for 15 minutes for these awful “rest breaks”.  Waste of money and makes for cranky kids.  We need our own pool.

The chickens continue to grow at an almost alarming rate.  They should be laying eggs by September sometime – we are looking forward to it!  We have also determined that the one we named Prudence is in fact the rooster, and Homer is a hen.  They’ve been re-christened “P-Roo” and “Homie-D-Hen”.  We also really really need to get our butts in gear and make them their movable run; they’ve picked the earth clean next to their coop.

The gardens look like crap thanks to the almost non-stop rain we’ve been experiencing (along with everyone else up and down the east coast).   The front vegetables seem to be faring the best of all of them, though the tomatoes are taking over and the Japanese beetles are eating my basil. 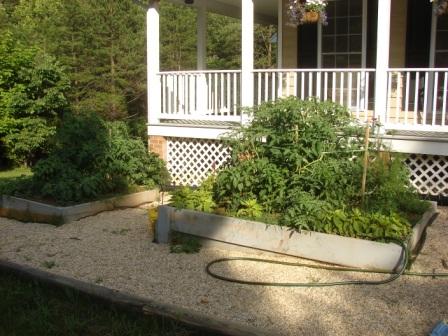 My hanging baskets look awful.  I can’t seem to keep them watered well enough – it’s that straw – like lining their planted in.

The front herb garden is choking in weeds and the herbs have been all but drowned to death.  I’ve decided that come fall when the tomatoes die out I’ll transfer all of the herbs to the raised beds and I can plant the tomatoes out back next year.  That way the herbs will be happy.  And speaking of the back garden – of the approximately 832,000 seeds I planted I have barely anything sprouting to speak of.  I think it was just too wet and cold for them (except the peas – they are doing gangbusters).  Out of frustration on Saturday I poked a few dozen zucchini and yellow squash seeds just barely into the soil and now they are all sprouting – thanks to it being sunny and hot for the last several days (finally!).  I think a trip to Lowe’s for more seeds is in order.

I also got me a new Le Creuset stock pot, courtesy of Paul getting a bonus from work for all of his hard work.  I fit about 8 corn cobs in it comfortably!

Of course looking at this site made both Paul and I think of a good seafood boil.  You can really tell how different we are based on the fact that he was thinking “crawdads” and I was thinking “Lobsters”.  Alas I had neither so we simply had corn on the cob with our dinner and I made my famous blueberry gateau.  This has been a favorite seasonal recipe for at least 10 years now.  I can’t even remember where I got the recipe, but I make about a zillion and a half of them while blueberries are in season.  After that it’s just too expensive.

See?  Two cups of fresh blueberries tossed with sugar and flour and tossed on top of a nice cakey batter before going in the oven.

Anyhoo, now that I’ve made myself hungry……that’s all I’ve got.  It’s summer, and it’s slow.  Hopefully there’ll be more to regale you with soon!

One thought on “The Summer Slow”