It’s officially gotten even slower around here.  The girls and I have been felled by some nasty virus that starts with a cough and sore throat and progresses into some nasty chest congestion and general crapiness.   I can’t imagine that the next few days will be very exciting considering we all feel like crud.  At least we have a pool party on the 4th to look forward to at the house of Paul’s best friend.

Last night before Paul left for Charlotte I got him to get a fire going on the back porch so the girls could make s’mores.  This has been sort of a summer tradition for us since we moved into this house.  Hanging out at night, looking at the stars, roasting marshmallows.  It’s been so rainy so far this summer so last night was the first real opportunity we had and we took advantage early in case we unexpectedly (but not surprisingly) got more rain. 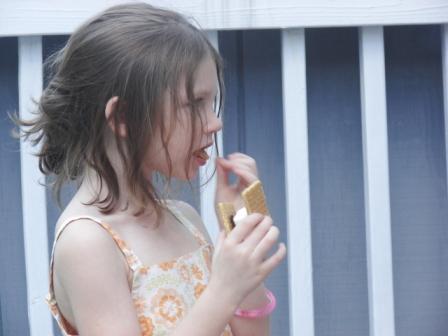 It didn’t take long for Neve to get into it. 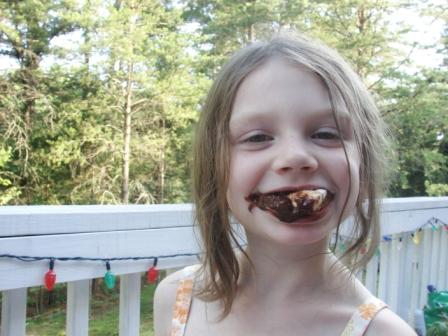 She tends to be one of those kids that you can only get a good picture of if she’s not paying attention. 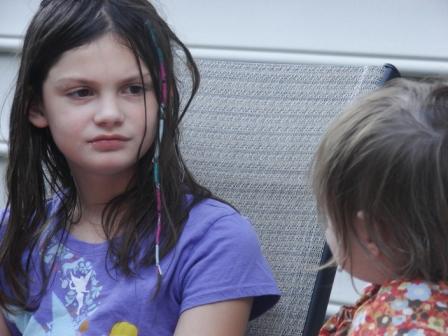 Emily found it difficult to relax as she was worried that Oona would burn herself (for the record Paul and I were there the whole time, so….. yeah).  The funny part is that Oona kept saying what we thought sounded like “Suck it!”.  Over and over.  We thought maybe she’d overheard Aunt Maddie insulting someone and decided she needed to tell US all to Suck It.  But we realized that what she was saying was in fact Chocolate. Our bad.  I guess we need to get our minds of out the gutter.  We also though that when she was saying “What’s That?” that she was saying “Oh shit!”

Beyond the back porch s’mores we have little to report fun-wise.  Hopefully things will be more exciting around these parts next week since we’ve got the holiday on SAturday and then we’re going camping for two days right after.

The garden is starting to show signs of life finally!  I poked a bunch more seeds in out there and mercifully it’s been hot and sunny for about a week now so they are all sprouting.  The pumpkin plants in the back are getting HUGE. 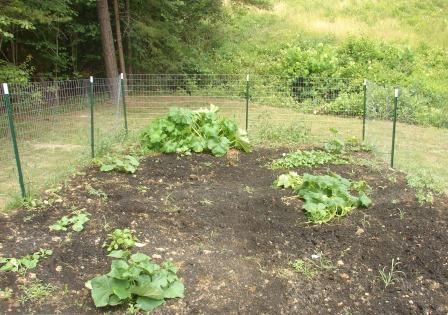 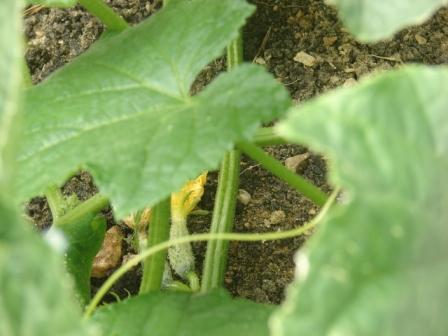 Check those little nuggets out!  I can’t wait for that crop to come in so I can make some fresh pickles!

And….. remember those pesky Japanese beetles I was lamenting before?  Eating my basil?  I found a solution that has worked so miraculously I can’t even believe it.  A zero chemical, enviromentally friendly, relatively low effort solution.  Remember these guys: 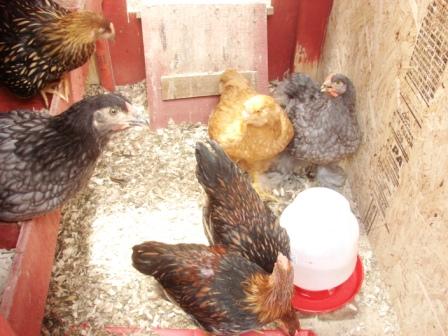 Every day when I go out to water the gardens I collect the beetles (easy – just pluck them right off the plant) in a bucket, shake it up a bit to stun them, and dump them all in the chicken feeder.  I’ve never seen a chicken go so insane over a bug.  It’s like crack to them.  I’ve been doing this for about 4 days now and every day there’s been about 50% less beetles on the plants.  Today I plucked a grand total of 4.  Totally worth the 10 minutes of effort.

And now since my brain is tired and I have nothing else amusing or interesting I will leave you all with two pictures of my cute little baby who is no longer a baby but a cute little girl, and these photos clearly show that. 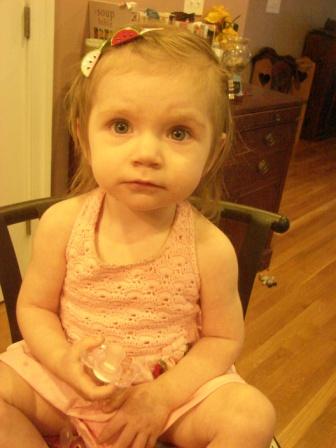 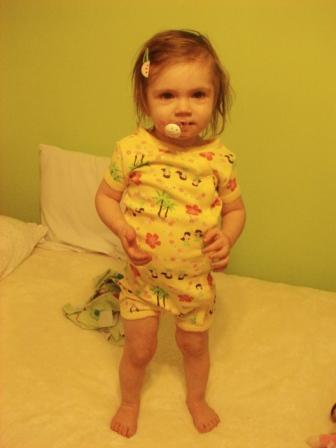 One thought on “Back Porch S’Mores”