While I anxiously await the final outcome of the goat giveaway (we’ll be informed by October 1) I have been trying to stay busy so as to avoid my head exploding from the tension.

I’ve been knitting away like mad (read – not doing any cleaning) on a cardigan for Neve – it’s getting close to completion and I will post pictures of it soon.  I’ve also been spending quality time with the chickens and interrogating them as to the whereabouts of all the eggs they are supposed to be laying for me.  So far they’ve had no comment other than “More treats please”.  Only Clementine has a valid excuse for not handing over the goods, as HE started crowing the other morning and has barely stopped since.  He is a lovely roo, I have to say. 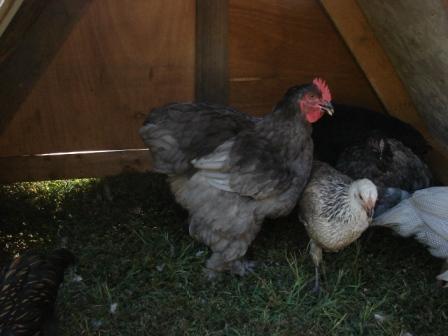 We’ll be putting them in a much larger pen and coop soon (as soon as the boss tells me I can, that is) and adding some females to keep them happy.  Three hens per roo is not enough to keep them from going a bit crazy (I know……human males wish they were so lucky, right?) and if I don’t add more girls chances are they’ll start fighting and picking each others feathers and they’ll wear out the girls I already have.  Stressed and worn out hens equals less egg production, and since I am having enough issues in that department……  But anyway I told Emily she should start reading them tasty chicken recipes as bedtime stories and smack her lips a bit.  Maybe that’ll put the scare into them.

In slightly more insane news – we bought a bus.  A Bus.  A big old ancient greyhound bus.  Why???  We’re crazy.  Haven’t you been paying attention? 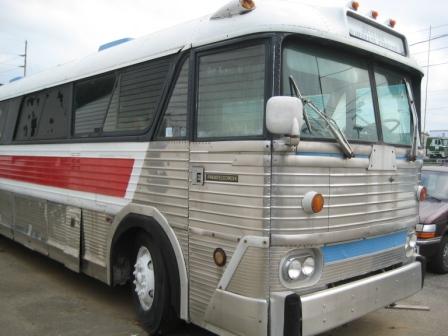 Actually we’d been researching rv’s for awhile and found this, which had been converted as a touring bus for a bluegrass band.  Neat, huh?  It needs a good amount of cleaning and I am going to insist on a new bathroom (I’m a girl.  I have 3 girls.  My sister, who lives with us 75% of the time, is a girl.  Get the picture?).    There’s the big storage area underneath it that Emily has declared “Perfect for Pippa the dog!”.  Poor Pippa.  No, we will not actually put her in there! 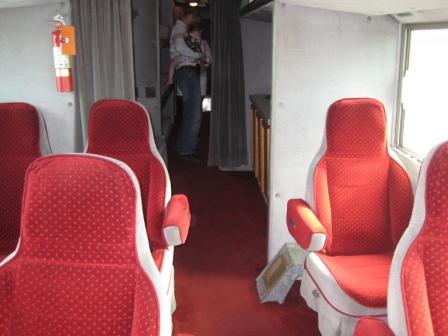 But it’s got these nice first – class style seats up front with nice big windows to look out. 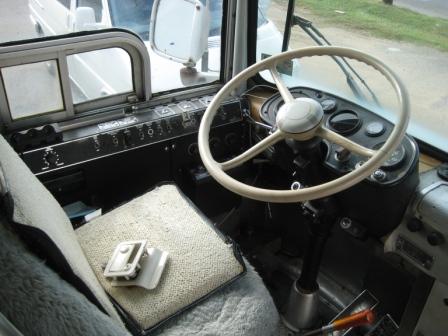 The driver’s area is pretty much identical to what I got used to as a transit driver (except that this is a manual transmission and manual steering – Oh boy….) 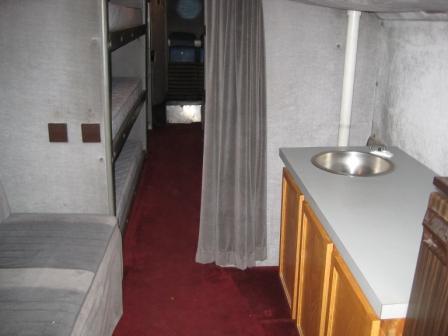 And it has a kitchenette area with sink, fridge and stove.  That couch on the left will probably get replaced with a dinette bench.  There are six bunks behind the curtain there, and in the back is the bathroom, a sitting area and a closet.  We’ll be camping in style from now on.  Good thing I know how to drive a bus.