Well, we knew this day would come.  It was a quiet fall and winter, we had a huge hatch – out of chicks last August and not one of those idiots will remain in the penned areas where it’s safe.  We have a large-ish group that free – ranges all over (even into our neighbor Jack’s yard – good thing he likes them) and I am always worried those dummies are going to get eaten by something.  I freely admit we get far too attached to them, and when they get snatched it’s sad and traumatic.

Fortunately, we have Tevye. 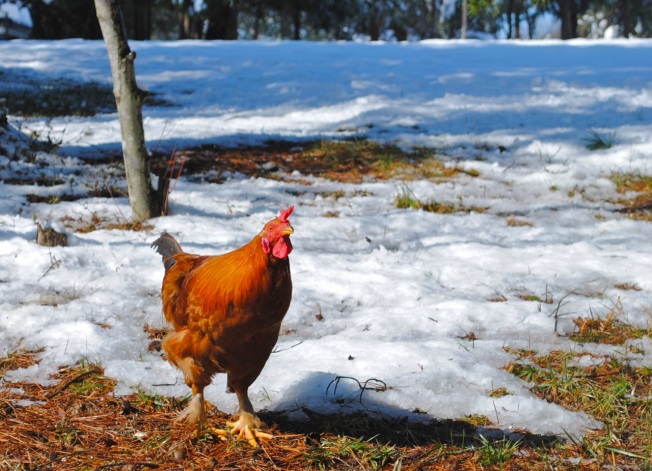 I’d been noticing that his rooster-ish behavior has been much like our dear departed Big Jim – unlike our other roosters who hog all the food to themselves and run at the first sign of trouble (or beat up on each other as well as us humans).  By this I mean that he is an exemplary roo – he makes sweet clucking noises when we bring out the food to tell his ladies to come eat.  He keeps them around him when they’re all free – ranging.  The few times I’ve noticed a hawk circling fairly low I’ve seen Tevye gather all the hens into the underbrush and wooded areas to keep them safe.

He’s also pretty darn friendly to us.  In other words, the perfect rooster.

Today the foxes came back.

We were alerted by the sound of probably all 40 or so of our chickens clucking in unison and when I looked out the window I could see a fox departing across the creek and away, a chicken clearly in its mouth.

Emily and I ran out and I heard a loud “squawk”, and then the fox dropped the chicken and ran.  It was Tevye, and he came bounding back to us.

A check through the yard proved no one was missing.  Tevye clearly gave the fox a good fight and kept the other chickens safe.  He’s got some rather nasty wounds right now, but they could have been much, much worse.  I doused him with Blue Kote, gave him some treats and sent him happily back to his girls, where he crowed loudly and triumphantly.  My fingers are crossed they heal up quickly and don’t fester. 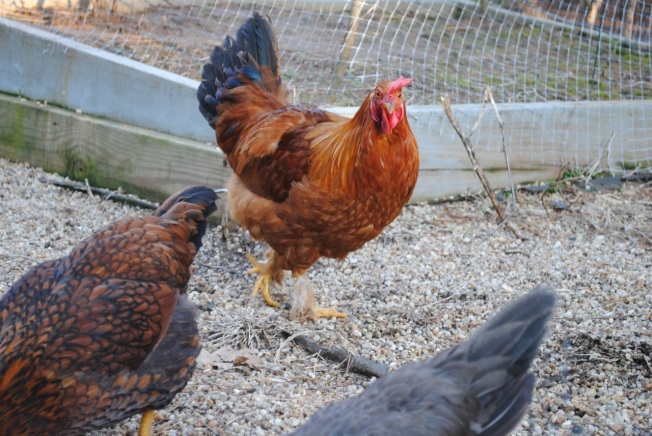 I think somebody deserves a bag of meal worms, don’t you?