All of our hard work creating the chicken prison?

The foxes (or foxen, as Jenny Lawson hilariously calls them) laughed at us.

This past Tuesday we awoke to fresh carnage.  Something had obviously made a grab at the chickens as they slept on the perches (which were long sticks hanging in the corner of the chicken prison).  You could tell by the feathers all stuck to the wire at that spot.

Then that same something dug under the wire and crawled under the two feet it extended along the ground into the prison.  This was also the point where it dragged out Prim, as evidenced by all of her feathers left behind:

Everyone else was present and accounted for, but unfortunately Fleur was badly hurt.  At first I thought she was just a bit torn open under her wing, and sprayed her with Blue Kote thinking she’d be fine, since Tevye had similar wounds after his foxen encounter.

Then we noticed under neck.  And down into her breast.  All. Torn. Open.  Her crop was even torn open.  You could see her dinner still in it, dropping out in clumps whenever she’d move.  Not something Blue Kote was going to fix.

I told Emily things didn’t look good and we should keep her comfortable as best we could until…..you know.

Emily didn’t take it well.  SHe sat in the garage with Fleur and cried as Paul and I tried to figure out what the #$*% to do next (the chicken proceeded to poop all over Emily AND lay an egg on her).

First off: no sleeping perched in the corners.  Second: secure the ground wire better.

Paul wanted to line the entire ground area with wire so nothing could tunnel in.  I was worried about the chickens not being able to scratch the dirt if we did that.

While he brainstormed that, I looked up “torn hen crop”on the internet.  Turns out, incredibly, it is totally survivable.  With surgery.

Because you know I had to give this hen a fighting chance at least.

In related news: can you believe most pharmacies do NOT carry dissolving sutures?  In fact, every pharmacy I called acted like I was looking for contraband.  I joked with the nurse at the local doctor’s office later that it’s like they thought I was doing open – heart surgery on my four year old.

I managed to get some dissolving sutures from the local dentist (shout out here to Dr. Mera – thank you for helping me save my chicken. You are my daughter’s hero!).

Then EMily and I went to work.

Blindly.  Completely, “I have no idea how to do what I am doing” blindly.  All I knew is her crop needed to be sewn shut, and it was now or never.

No, I did not take pictures.

Emily held her while I used a lot of saline to clean it out, sewed up what I thought needed to be sewn, stitched her breast skin back together, sprayed a shit – ton of antibacterial wound spray on her, gave her antibiotics, and set her up in a clean space in the garage. 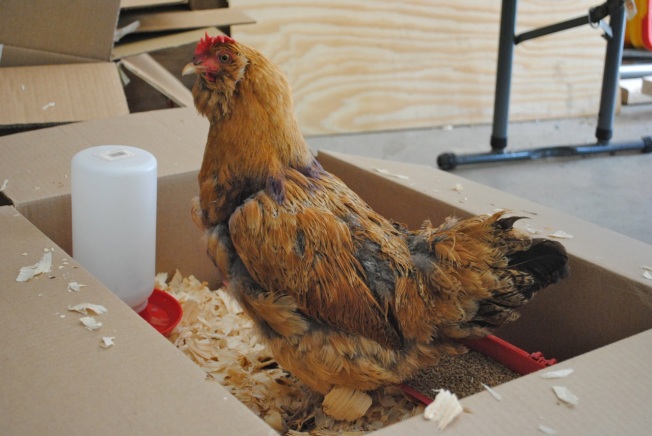 She is still eating, drinking and pooping (which I hope means I didn’t actually sew her crop completely wrong, thereby preventing the food from ever leaving it) but she is not making much effort to leave the box .  My guess is having your chest stitched back together without anesthetic makes you pretty damn sore and you don’t want to move much afterwards.  The skin at least does not look puffy or swollen, and it looks to be healing over.

She also gets upset when she sees the neighbor’s outdoor cat wandering around (the cat has adopted us, apparently, and has no interest in chickens) and she bawks madly, puffing up and pacing around frantically.  She has also started fighting me when I go to give her her antibiotics.  I think she may actually make it.

As for the prison – Paul decided yes on the welded wire covering the ground, except at the very center.  Where he made them a sandbox to scratch in.  Then he built a frame for perches over top of it. 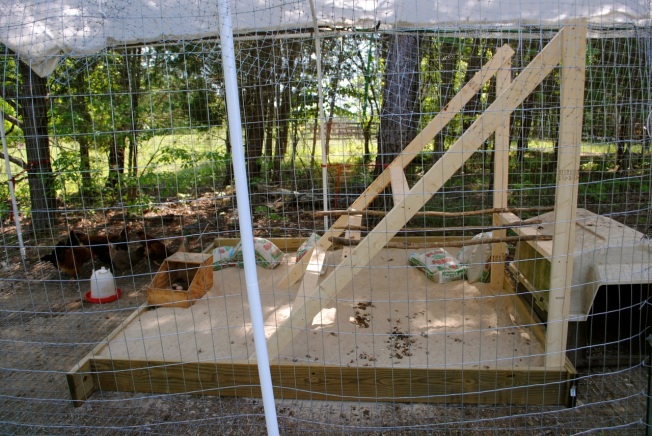 I am not saying nothing will get in.  I will not tempt fate again.   I also don’t know if I will ever be able to free – range them again either.  Which is sad, because i will miss those dark orange yolks from all the grass.

They come at too steep a price, though.