I’ve been thinking lately that the pigs are really the best animals we’ve got here.  They’re easy, they’re entertaining, they’re friendly, they’re pretty well self-contained, and they eat just about anything.

In addition to the store-bought pig feed they get twice a day, we feed them lots of our kitchen scraps.  Whenever I chop celery, they get the heads and ends.  Those apples gotten a tad too mealy for us to enjoy? The pigs adore them.  Watermelon rinds? Heck yeah!

It’s pretty convenient with our set-up, because I can open the back door and just toss it out to them.  Sure, they have to fight the chickens a bit, but it’s worth it, because those chickens tend to lay their eggs where the pigs like to nest in the shed.

Yes, pigs nest.  There’s a ton of hay in the goat shed that the pigs have burrowed into and made their own, and the chickens love to go in and lay their eggs in there.

As they’ve gotten to know me they are vocal in their affections.  They’ll nudge at me and grunt a bit until I reach down and scratch behind their ears (or give them the tops from the carrots we’ve pulled from the garden).  Charley has always been a love, but Churchill took a bit longer to warm up to people.  He’s still stand-offish with new faces.  I feel crazy proud that he’s let me into his affections.

Another thing I’ve come to love is what we call “The Piggy Chorus”.  It happens twice a day.  When they decide it’s high-time to be fed they start singing and squealing for us.  Then, when they’ve spied us headed out with our buckets, they grunt appreciatively. 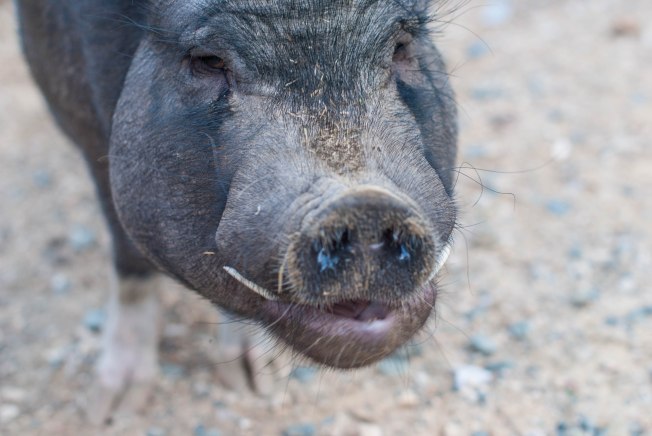 Check out the little tusks!  Even though they are neutered, they’ve both grown a small (but impressive!) set of tusks. 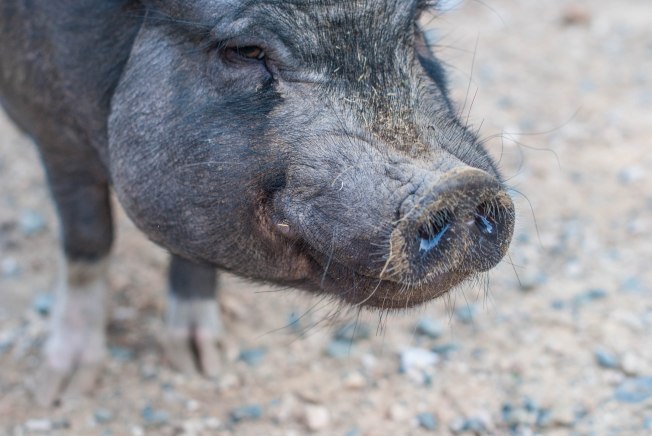 Isn’t Churchill such a handsome boy? 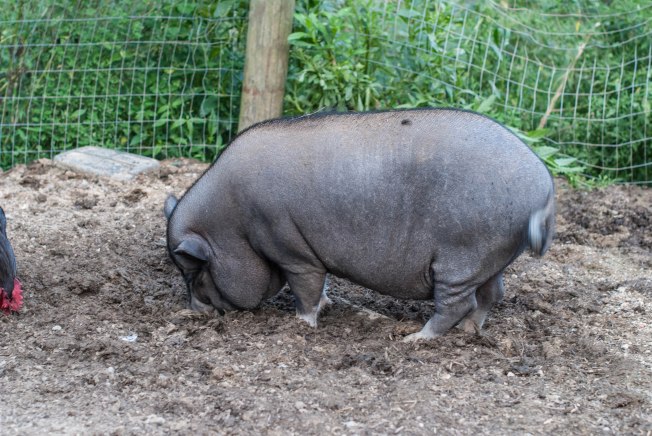 As for Charley, he tends to develop pig alopeocia every summer. It’s due to how much he likes to roll around in the dirt and mud, and his bristles wear off.  When it first starts he walks around with a pretty bitchin’ mohawk until he manages to rub off that as well.

Tonight I brought out some little watermelons for them to enjoy; Charley was too busy rooting around for something in the mud.

Churchill was more than happy to have Charley’s share!