So the kiddies got to hang with my in laws over the weekend and I am well on my way to being done with the Vincenzo socks as a result.  It was a pretty relaxing time…..perhaps due to my consumption of too much of this:

A WHOLE BOWL OF SUGAR.  It’s that Fun Dip or whatever it’s called.  A late Easter gift from the extended family.  But, it turned out ok.  She was put to work in the kitchen. 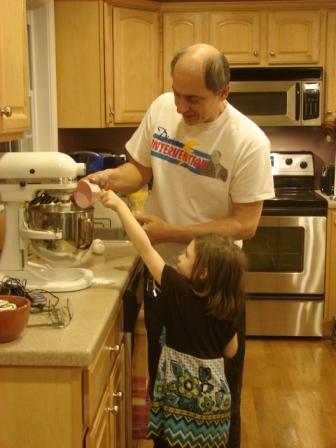 Neve and Emily helped learned from grandpa how to make Hamantaschen cookies.  Yeah, they didn’t last very long.  Good thing I recorded them for posterity before they all disappeared into our bellies.

SO after all the cookie eating and wine drenching I figured it would be best to get out of the house and walk a bit this week.  Wednesdays are our day for going to the Children’s Museum on our pedestrian mall downtown, and we thought a picnic lunch at the park afterward was just the ticket to enjoy the weather and prevent permanent hermitude from setting in.

It was fun – we had a big group, as always, and the playground was a hit (fortunately for Neve, not literally).  My little daredevil continued to make me cringe while she climbed all over the various play equipment.

The lurky dog guy was there (a local who lets his do run free contrary to our leash law.  Last time his dog caused a bi problem for a woman with a toddler, an infant and her dog, which was leashed.  I grabbed the loose dog before the poor woman got knocked down, and the lurky guy couldn’t seem to understand why I would do that).  There were tons of kids and parents of both genders, which I found refreshing – it’s nice to see dads out with kids on a weekday.  Normally it’s just us over-stereotyped SAHM’s being told our large groups of wild children and SUV sized strollers are too much for their boutiquey stores (true story!  And it was a children’s clothing store!!!!!)  Wow, I digress.

Anyway, the big hit was this:

A push – button operated waterfall!  It turned out to be overly chlorinated and bleached some shirts, but the kids LOVED it.

SO we decided next week we’d bring their bathing suits so getting totally wet would be okay.  I was feeling all happy and excited for our kids until Paul had to ruin it by telling me that “drunks and hobos probably use that thing for a urinal”.