Happy First Day of Spring everyone!  I wish I could say that I was able to get my spring cleaning done, or even finish off any of the projects I’ve had laying around all winter, but it’s been a week, let me tell you.  I did whip up a batch of cupcakes last night for the girls to celebrate the equinox, however.  Neve had picked out a box of cake mix last time we were at Target that had springy rainbow chips in the mix and some fluffy pink strawberry frosting and has been waiting not so patiently ever since for me to bake them.  So after dinner was done last night Paul took Oona for me so I could get the little pink treats done.  I’ve never actually bought strawberry frosting before (I come from the yellow cake with chocolate frosting school of cake appreciation) but it tasted pretty good.  They looked lovely sitting on the island in the kitchen, waiting for Neve to discover them.  Too bad she hadn’t eaten her dinner.

Not that it mattered anyway, because after changing Oona into her jammies and changing the sheets on the bunks for the girls I returned to the kitchen and where there should have been 15 pink cupcakes there was instead this: 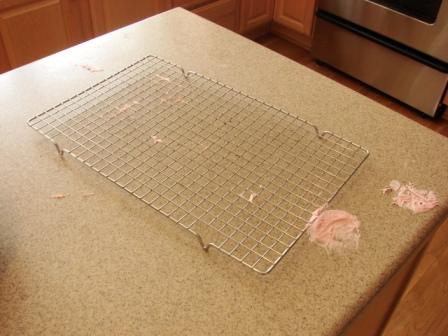 Gone.  Paper liners and all.  You can’t see it in the picture but there was also pink smears all over the floor around the island.  And one very guiltily satisified dog lounging in the dining room, licking her paws.  Paul was beyond mad.  I was rather upset myself, considering I was the one who put in all the baking work.  But I was able to not be too angry because it called to mind the incident of my 10th or 11th birthday (can’t remember exactly which) when we lived in a rather tiny house in Kingston, NY and we had another golden retriever named Nugget.  My mother baked me a chocolate cake with chocolate chip frosting (and I was SO excited!) and left it in the middle of our dining room table to wait for the festivities.  And it vanished.  Completely.  The plate was found licked clean on the floor.  I don’t remember what happened after that but we love to bring that story up every tme a family dog eats something they shouldn’t.  I simply sent Pippa to bed without her doggy dinner last night.  After all, she was no doubt quite full.

It has otherwise been a quiet yet frustrating week.  Oona has strep, and though she has been on meds since Monday she is still not really herself.  She won’t let me put her down for anything, which makes cleaning and meal prep (not to mention showering) rather difficult.  Tuesday was our 13th wedding anniversary and since we are going to Mexcio in May we didn’t complain too much that we spent it trying to keep Oona happy (mostly successfully).

I’ve also been sitting with my eye on a large box of fabric that Paul’s aunt brought down this weekend for me.  So very nice.  I can’t even begin to tell you!  It’s a bunch of upholstery weight bolts from a closed out warehouse.  I am so psyched to make things with it that it’s been killing me sitting still with Oona, who is not happy unless my butt is parked in one spot all day.  The only thing I’ve managed is to finish Neve’s pj pants which were already cut and pinned and lingering on the sewing machine. 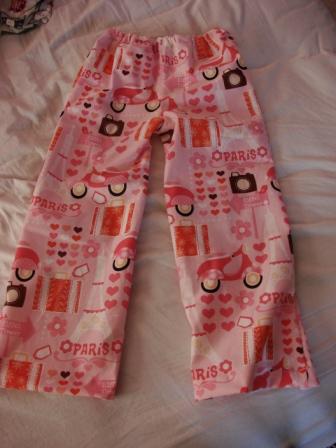 Such a cute print!

Hopefully the weekend will be better and Oona will recover from her woes.  She’s just been so frowny and miserable.  I want my happy baby back! 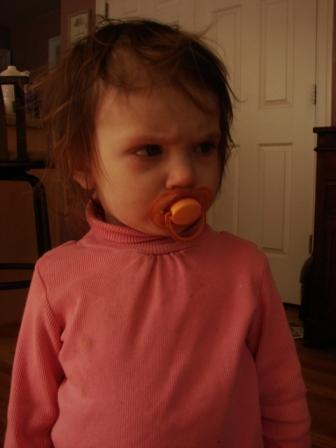 2 thoughts on “Doggone It”