So Penelope the rooster has been taken back to the farm from whence he came.  We dropped him off and came home with a black Jersey Giant/Cochin mix hen, a Blue Orpington hen, a sweet Americauna hen, and 2 lavender Guinea keets (female baby fowl).  Um……yeah.  Couldn’t resist.  If I could’ve, I’d have brought home about 30 more.

We were advised not to place them with the chickens at home until dark so they wouldn’t be all fighty right off the bat.  We did as told, and aside from a little bit of squawking at first (along the lines of, hey!  That’s MY nesting spot!) all seemed well.  P-Roo even made friends with the new hens (and why not?  They are his harem, after all).  Today out in the tractor however, it was a different story.

Our resident hens were all kinds of bullying.  Pulling feathers, pecking, pushing, sitting on, chasing, clucking noisily.  Poor little Benny the Americauna (that’s her all mottled – colored above).  She has one eye that got injured when she was just a chick so she is sort of a disabled hen (I loved her instantly); the others picked up on this immediately and pick on her hard.  They also pick on the guinea babies.   The guineas are not chickens.  They are a fowl that actually make excellent guards, keeping away predators (particularly rodents and snakes) and eating ticks.  They rather resemble female turkeys when full grown.

It’ll take a little while but eventually they’ll all get along.  And little Benny (named after the mom on George Lopez – the other 2 hens are Muriel and Truffles, and the guineas are Itchy and Scratchy) will eventually lay blue eggs.  So now we have quite a large compliment of birds.  Next we need a goat or two.  I’m not kidding.

I got yet more cucumbers out of the garden and a few more yellow squash, plus a ton of tomatoes.  Last night I cooked up some angel hair pasta and sauteed some of that squash in olive oil with garlic and a few of the tomatoes and threw it on the pasta with some fresh parmesan cheese.  Yummy!  I also used up a large amount of the ‘maters making up a big batch of pico de gallo.  For dessert I made a buttery deep chocolate bundt cake and topped it with berry sauce and fresh whipped cream: 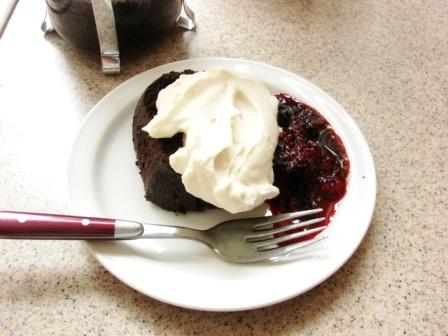 Hungry yet?  It goes great with fresh pressed coffee.  There’s a hint of cinnamon and espresso in the chocolate.

Today the garden yielded this:

I can’t believe how early this ripened.  I have another larger one almost ready and a few more still growing.  Next year the peas and beans will be planted earlier; the pumpkins a little later. It’s barely August and here I have this Halloween – ready pumpkin.  I haven’t decided what I am going to do with it yet.  I am pretty sure I have some white Lumina pumpkins coming in as well.  Maybe I’ll boil and mash up this guy and freeze for use in a pie later.  Depends on what else is going on this last week before school starts.  The girls are sad to say goodbye to summer before summer is over, and I am sad that my days of sleeping in are over (I’ve been luxuriating in bed until 8 or 9! Next week, it’s 6).  Backpacks and lunchboxes are ready and stuffed with supplies.

My Emily turned 10 this past week – I’ll have a birthday post up for her soon (laziness, procrastination, scanner issues have prevented it being on time).  Instead I’ll leave you with the promise that I am trying to get some knitting done and a picture of my therapist, the highly regarded Dr. Jasper Katzenburg.  Purr treatments are all the rage, you know.

One thought on “Throw – Down in the Hen House”