School started Monday and we are slowly adjusting back to the realities of a scheduled existence.  Next week Girl Scouts will start up again for the older girls as well, and if I can swing it I’ll be signing Emily and Neve up for ballet as well.  We’re about to head into the thick of it, just as the summer heat is turning to “extra crispy” and my pool – owning friends don’t even venture outside during the daylight hours.

The first day went well for everyone (except my sister, who says that high school “sucks ass”), despite the early morning rise that we have yet to acclimate to.

Neve insists on doing her own hair now, which is still better than Emily who resents having to put a brish anywhere near hers. 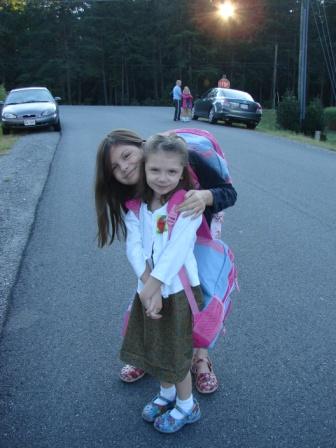 As if that weren’t bad enough, the bus has no A/C.  They have quite a hot and sweaty afternoon ride.  Every day they get home red and lethargic, or – like today – the 10 year old has “two words for you mama” as they come careening away from the bus stop and into the group of other moms I have gathered with and she yells “It’s friggin’ hot”!!!

Combine that with the fact that little Oona says “butt-head” now and I am surely in the running for mom of the year.

Fortunately bacl to school means a little bit of back to sanity (if not back to exhausted).  Emily gets an allowance for chicken care and has been out at 6 every morning taking them out of the coop and getting them into the tractor.  Then she’s out again at 9 pm to put them back for the night.  They seem to be happier to be on a regualr schedule as well.

Since we’re on a spending diet now we have forgone buying cereals and frozen waffles and what have you and I have been making a real breakfast every morning; this has made for happy kids.  Every day is different and every day they are excited to see if it’s eggs, pancakes, french toast, etc.  This is good for me, because I never ate breakfast before unless you count 18 cups of coffee and the occasional donut.

It’s also quieter around here during the day with just me and Oona.  She’s back to napping again as well – the 6 am wake up call means she’s tired enough to go out after lunch.  I even managed to get a dress made.

It’s the Trapeze Dress from Weekend Sewing.  I think this is my third one; it’s also my favorite so far.

All in all it has been rather great this week.  The only bump was yet another escape attempt by Sherbert the Hamster, henceforth to be known as “Luckiest-ass-hamster-in-the-world”.   Emily got this crazy fuzzy thing for CHristmas, and it escaped that very day.  Right out of the cage, out of Emily’s room.  I found it later that night, downstairs, under the couch. A few minor scratches seemed to be her only trauma.

She’s escaped several times since then and usually turns up in Emily’s closet, Sushi staring her down, daring her to make a wrong move.  This morning, however, was different.  Emily came to me in a panic that she’s gotten out again and so I told her to sit with Oona on my bed while I foraged around for her.  I had just begum looking when Emily screamed “Sherbert”!  She’d walked by her bathroom on the way to my bedroom and there was the hamster, sitting on the bath mat, being watched very closely by a certain little Jasper cat.  And once again, she was completely unscathed.  Like I said, with 3 cats in the house (who happen to be top-notch mousers, btw) that is one LUCKY hamster.

I need that kind of luck.

And then there’s Oona, who is up to her usual tricks, getting into every darn thing she can and giving me no peace.  But she does make me laugh.

She likes to wear Neve’s glasses.  These are the glasses Neve wears when she “becomes” Mr. Smitty Harold, her middle – aged, male alter – ego.  She keeps me on my toes, but it’s worth the aggravation.

I pulled more pumpkins from the garden and there are at least a dozen birdhouse gourds growing.  I also have some weird large white squash that was supposed to be zucchini but is most definitely NOT.  As the weather gets cooler we have a lot of land to clear out and weeds to pull (always).  I’d like to get some blueberry bushes in teh ground for next year as well as some apple and peach trees.  Lots of work, yes.  First we need to get used to these early mornings, though. 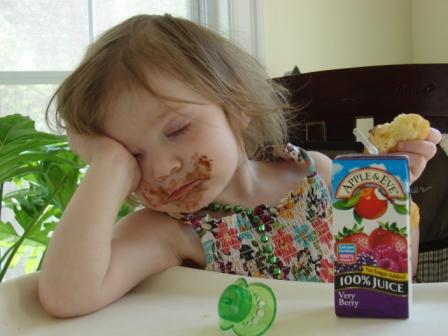 One thought on “Back to the Grind”