I spent the better part of an hour writing up a post and went I hit “save”…it exploded.  SO frustrating!!!  Just the right cap to my “perfect” week.

Last week I was feeling frustrated and fed – up with the state of the house and the property and in the midst of laundry and cat litter the handle broke off my washing machine and I think part of me may have snapped as well.  My rage ended up being focused on a small accent table in the “sitting area” portion of my bedroom.  It’s been there for over a year, waiting to be repainted but instead accumulating lots of junk with no other place to go (paint supplies for the table and the alcove itself, some discarded batteries that hadn’t made it to the trash, my uncle Jamie’s underpants he left here last Thanksgiving……..dont’ worry.  They’re in a ziplock.  We had intended to frame them and send them back as a gag, but never got around to it.  Sorry guys!!!! (Oh come on….like you all don’t play weird jokes on your families)

As I was saying, in my rage I zeroed in on this poor little table and decided that damn it, it needed to be painted.  Right now. I dropped everything else I was doing to prep the area.  While I was at it I figured I could paint the frame of the poster I intended to hang to match it, and heck if I was doing that why not paint the whole dang alcove?  Never mind it was nearing 7:30 pm on a Wednesday night.  I needed to expel some pent up fury! 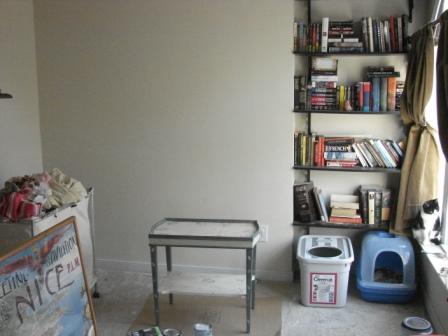 Before.  This is the view from my spot on the bed.  I’d been living with this for a few years now and I was more than ready to fix it.

While the girls congregated on my bed and watched Ghost Hunters and Destination Truth on SyFy I painted and cleaned and re-arranged as much as I could.  I finished up around midnight.  It’s not magazine worthy, but it is a huge improvement. 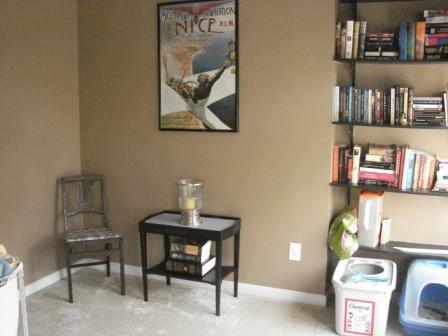 The next morning, while admiring my handiwork I realized that I still needed some sort of window coverings.  I had the fabric laying around for ages and decided to just get to it.

While the rest of the house deserves nothing but our shame and derision, my bedroom at least looks halfway acceptable.

Emily cleaned her hamsters’ cages for the first time in Lord knows how long over the weekend.  I told her to dump out the old bedding and food into a trash bag and then wash out the cages with soap and water in the bathroom, which she did.  Except for one thing.  She also rinsed out the stuck – on food into the sink.  Hamster food is mostly seeds.  What do seeds do in a damp environment?  They sproout.  I looked into the bathroom one evening and there were plants growing out of the drain in the sink.  Great.  We should be jailed for our house-keeping skills.

Emily made yet another mess two nights ago, but this time it was ok.  She had to make a totem pole for a class project and when I pulled out the plaster of paris and a wrapping paper tube and paint Paul mentioned that he could much more easily make a totem pole with some wood and a chainsaw.  Here’s the thing:  Paul’s never been what you’d call “good with a chainsaw”.  Not that he’s inept or anything, but he’s not artisitic on his best day, and I can’t imagine how on earth he’d figure out a totem pole.  Not one to back down from a challenge he went to it while Emily and I hedged our bets by getting to work making a mold out of the tube and some duct tape and working with the plaster.  In the end Paul won out surprisingly with a superior product.  Since it is a rare occurrence I don’t mind admitting he proved me wrong.

The wooden one on the right is Paul’s.  Emily painted them herself and wants to take both of them to school.  She better get an A!!!!

Yesterday I had planned on organizing the great laundry disaster of ’09.  First I went to check on the chickens, though and found that HenRietta was missing.  She had been escaping the pen all week (no idea how) and I figured I’d find here running over once I started scattering some corn for them.  Instead, just on the outside of the electric perimenter, I found a clump of grey feathers.  Then I followed a trail of them out to the backyard and down to the stream, where the trail went cold.  We scoured the woods but found nothing more than those large masses of feathers and a single animal print, suggesting either a large fox or a small bobcat.  Poor Emily is devastated and planning an elaborate funeral and feather burial.  Paul and I have resolved to strengthen our security system.  Currently the pen looks like this:

Soon we’ll be getting a goat – we’re being gifted a handsome devil courtesy of Paul’s uncle.  Paul is actually on board with this plan, and is helping me devise a list of needs.  We’ll be expanding the electric fencing and putting up a shelter, but when I mentioned perhaps a guard dog I knew I had lost him.  Then I slipped in a little known faxt about how llamas make great companions/guards for goats and sheep, and Paul completely agreed that we needed one.  I’m looking at a few this weekend.  I’m as shocked as you are.  I can’t believe Paul is so okay with this.  I am totally going to strike while the iron is hot, I’ll tell you what. I’ll also need to see if I can find a female dairy goat for our new boy.

Now if I could only get my chickens to lay some darn eggs.  Ruby says she’s considering going rooster instead.

I put two little text boxes on this photo to point out the pointy saddle and hackle feathers she has begun to develop.  Hens don’t get those.

2 thoughts on “Too Busy To Think, and R.I.P. HenRietta”