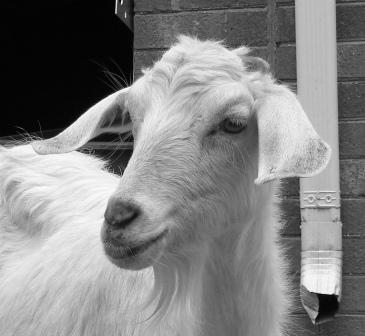 This little girl is a mighty ivy eater.  She inhales it like fine cuisine.

I’ve been taking her out of the fence to eat all the weeds that are cropping up.  Today I’ll be turning the electric off and having her walk the perimeter – there’s a ton of the poison stuff threatening to overtake the wires, which would short out the fence.  The bad thing about poison ivy is it’s very difficult to get rid of.  If you pull it all out you have to be very careful to wear protective clothing and thoroughly clean whatever tools you use.  You also run the risk that it will all grow right back if you don’t remove all the root vines and seeds.

Spraying weed killer is another option, but then you’re using poison (and I personally don’t like using poison unless I have to; more so because we have a well, and whatever goes into the ground…..eventually goes in the well.   Hear that Chem-Lawn???  Stop sending me flyers!) Plus we broke down the second year we lived here and sprayed like mad after I got two heinous cases of poison ivy rash.  Let me tell you……..it all came right back.

However, a hungry goat is a great option.  A lot of towns all over the US use goats to clear out invasive and unwanted plants from public lands.   Check out this one.  It’s a win – win.  In many cases the goats are loaned by a local farm for the duration of the clearing.  The farmer gets free food for his goats, the town gets free weed control.  Goat droppings are not an issue; they’re practically pure compost.  (just like llama droppings!)

Milkshakes is really in her element when we’re out clearing plants.  She mows it down fast and efficiently.  As we clear out our property we hope to be able to move the animals around as needed to clear out brush – both for their benefit and ours. 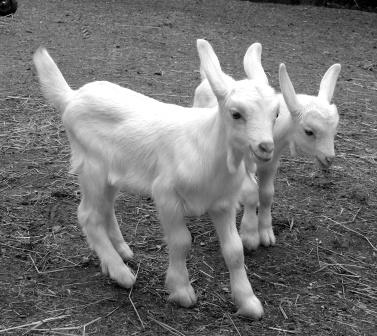 The babies have also been eating grain and hay and soon should be ready to partake in weed control as well.  Milkshakes is growing impatient with nursing them.  As a mother who breast – fed 3 babies for almost 2 years each……I can totally relate.  Having someone hanging off you all the time can get rather old.

Jerry will get his turn outside the fence eventually.  First he needs to learn to respond properly to haltering and walking on a lead.  I’ve gone out a few time since his “brain removal surgery” and gotten the halter on him – not without a fair amount of trouble I may add – but I can do it.  Then he can help with the stuff growing higher up.

The chickens and guineas…….we’re getting about 4 eggs a day now, but the ticks are pretty bad.  Guineas are fabulous tick control, but we only have two.  If we had a lot of land and not a lot of neighbors I’d get a whole flock of them and make darn sure we didn’t have ticks.  But the thing is….they’re really, really loud (don’t believe me? This is what we hear every day).

So, no more guineas for now, and the chickens will have to deal with staying inside the pen to avoid being eaten by something.

Someone should tell Mabel.