Somewhere in this picture there is an epic fail.

Paul’s got this thing, you see.  This thing where he has to get something stuck in the mud at least twice a year.  I don’t even bother mentioning it anymore because it’s no longer newsworthy.  Plus he generally is able to manage the situation on his own.  Occasionally, though……he gets in over his head.  Or in this case, WAY over his head.

This is a rented bobcat.  We’re clearing out the back acreage to make room for the pool, the animals, and a big garage.  Our neighbor Jack is likewise extending out his yard, fence, and house.  So they rented this big toy.  It’s the kind they recommend for work in muddy, swampy conditions.  Because it’s not supposed to get stuck.

He tried digging it out with shovels.  I felt pretty sure that if he kept up with that he would just make that thing sink deeper and deeper.  The place where the machine got stuck is smack dab in the middle of the stream out back and the water was rising every time more mud was removed from the scene.  Time to call in a tow truck.

Big truck.  With a winch and lots of pulling power.  Oh, and a total wuss behind the wheel.

The winch wasn’t powerful enough.  He didn’t want to back the truck too close to the mud, and he certainly wasn’t going to drive down the powerline path on the other side of the stream to pull the bobcat out that way.  He wanted to try driving it out instead.  I don’t know why he thought it would work.  I think he managed to get it stuck even worse.  $175 later we still had a stuck machine on our hands.

So our neighbor, Jack, did what the tow truck guy wouldn’t.  He drove down the power line path to try and pull it out from that side. 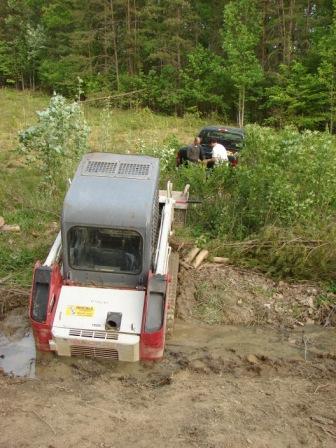 This is when I started to feel the frustration that these guys must have felt.  Jack’s truck just didn’t have the power to pull it out – but that tow truck could have done it without a doubt.

So we called in further reinforcements.

Another neighbor, with a much more powerful winch. 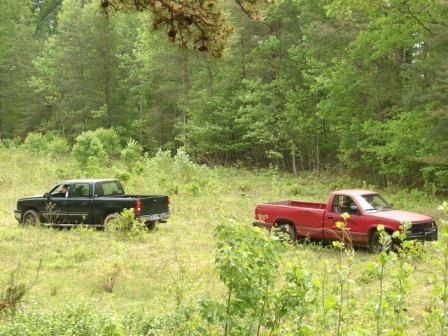 Who then got stuck and had to be pulled out.

Jerry snacked on some trees while keeping one eye on the excitement around him.

He doesn’t understand why we would want to play with such big toys to begin with.

Once all of the rescue vehicles were unstuck we hooked up the big, bad, super duty winch to the bobcat……….and after almost a day’s worth of trying, failing, worrying, trying again, failing again and worrying some more……they pulled it right out.  Just like that.  Like it had never been stuck at all.

After that Paul drove it down the power line path and out onto the road to come around back home.

One thought on “Mud Slinging”