First, an update on the monster spider / shed disaster.

Paul cleaned out the shed for me today after continual failure to find and dispatch said monster spider.  I went in after he had thoroughly removed all the old bedding and done an inspection for creepy crawlies.  I brought a broom in because I wanted to clean out the dusty cobwebs from the corners to discourage anyone from returning.

Mr. Monster Spider was waiting for me on the floor.  Paul got him this time.

The shed is ready for chickens.

Today, then, was “cleaning day”, at least outside.

Earlier this week, though, I had a lovely “making day” in the kitchen.

My Weck jars had come in the mail so I was ready to make some Brandied Cherry Jam.  We were almost out of bread, so I needed to make a loaf of Pain de Mie.  I had bought some fresh burgers from Whole Foods and I wanted to make some buns to serve them on. AND my good friend, Marie Grace had convinced me I needed at long last to try making yogurt.

I managed to accomplish it all in one spectacularly grueling day.  I’d like to pace things out more in the future, but the results were so worth it!

The jam was the same that I made last year after cherry – picking : a lovely simple cherry jam with some brandy added at the end to balance out some of the sweetness.  I used 6 lbs. that I had waiting in the freezer for just this purpose.

As always, I wish I had more.  Six pounds made only  three of these lovely 1/2L jars plus a pint for my friends Keith and Jessie, who are avowed cherry jam fans.

While the jam was going I was also heating milk for yogurt and letting two types of bread dough rise.

For sandwich bread I use a Pullman Loaf pan, or Pain de Mie pan, depending on who you ask.  I use the recipe from King Arthur Flour, and it’s been a favorite here.  I make a loaf probably every two days.  We also enjoy the Cinnamon version, which probably is to blame for putting a few pounds back on me that I had recently lost.

Anyway, pain de mie has a lovely, dense crumb that is perfect for slicing for toast or sandwiches, and very easy to make provided you have the pan ( a stand mixer doesn’t hurt, either). 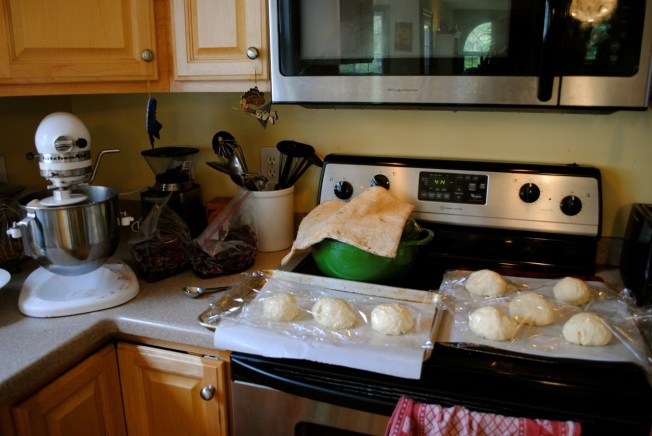 SO while the pain de mie was resting I was also working on those burger buns.  These have hands down been one of the biggest hits ever to  come out of my kitchen.  They are the PERFECT burger bun, bar none.  And again, super easy.  The recipe comes (of course) from Smitten Kitchen and the name says it all: “Light Brioche Burger Buns”.

I can promise you will not be sorry if you make them.

I always wanted to make yogurt at home, but for some reason I didn’t think I could make any I’d like without lots of special equipment.  I figured it’d be fussy and time consuming without a yogurt – maker, and I prefer Greek – Style, which is much thicker.

Then my friend Marie posted THIS about making yogurt in a crock pot (or even without one!).  I cheated and ordered a greek yogurt strainer from Amazon, but otherwise the only thing I bought to get going was some local organic, grass-fed milk and a container of yogurt.

The yogurt came out perfect!  At first it had some liquid floating around it (that would be whey, which you can save and use for baking!), but after a night sitting in the strainer it was the thickest, creamiest, most delicious yogurt I have EVER had.

It is so good, even Paul is obsessed with it.  Now we’re talking about it all the time.  “Hey do you think THIS will be good on top of the yogurt?  What if we add THAT to it? IT doesn’t matter if this jam’s a bit strong, it’ll be great with the yogurt!” 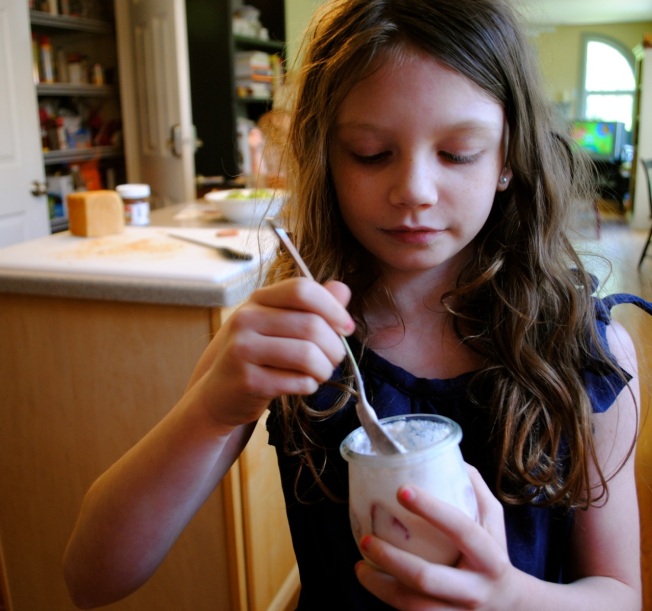 I’ve made two batches now, and I’ve been putting it in these lovely little single – serving sized Weck jars.  We’ve been topping them with the cherry jam, as well as some strawberries we had macerated for shortcake.  I’ve even been known to eat a whole jar totally plain and whine for more.

“Making Day” may have been exhausting, but now I know I can make yogurt whenever I want, and our cherries have been wonderfully preserved.

The bread is an almost every day occurrence, but the burgers?  Out of this world.