Our neighbor (who we love) has a few outdoor cats that occasionally we will see wandering around our property, checking things out.  Although I am completely opposed to the concept of “outdoor cats” (they don”t live as long, they get into fights, get hit by cars, eaten by predators, pick up diseases, annoy your neighbors by pooping on their herb garden or terrorizing their chickens or transmitting toxoplasmosis to pregnant sheep) I have never been bothered by these cats.

These ones don’t poop on my herbs.

Or pee on our car tires, or scratch up the paint job and make Paul crazy.

They also have never, ever once shown any interest in the chickens.  Even when those birds were free – ranging everywhere.  In fact, Miss Gaga used to escape her pen, wander over to the neighbors’ house, and eat the cats’ food off the back porch.  Sometimes that hen would scare the cats off and hog it all to herself.   The neighbor thought it was hilarious, and started giving her treats.  I made sure to give them eggs for their trouble.

Lately there’s a new dog living next door.  A very excitable young rescue terrier who thinks it is the best thing ever to chase cats.  Usually up the trees.  Sometimes over to our yard.  Where one kitty has decided to stay for good.

We noticed this little tabby with a gravelly meow hanging out on our back deck for a few days in a row and figured she was too scared of the dog to go home, so we fed her.

And then again the next day.

And again after that.

When Paul wanted me to put her in the garage one colder night so she’d be warm I knew we had ourselves a  cat.

She’s what we like to call “aggressively friendly”; you can’t stand or sit near her without a major purr – fest and some loving – up. 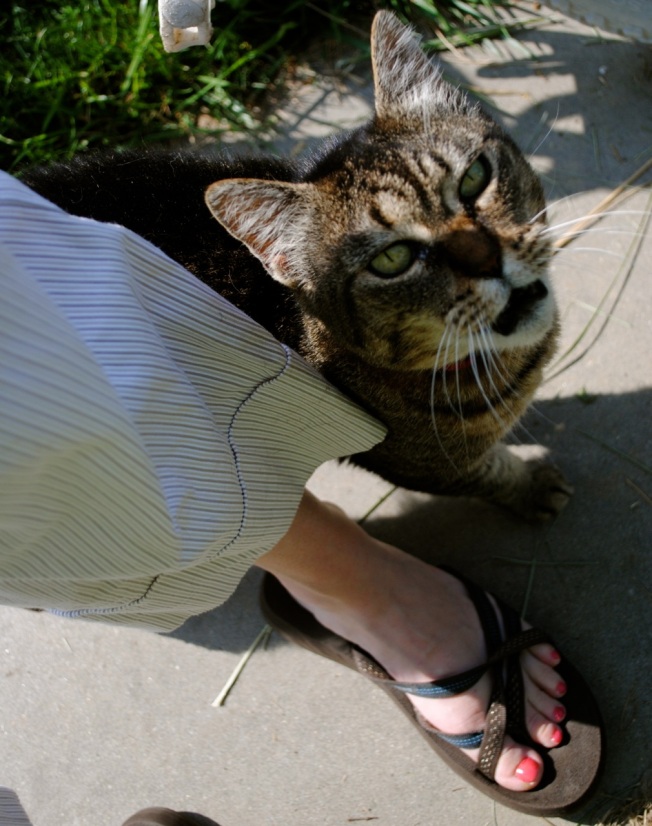 Naturally the kids were smitten.

One day we finally got a chance to talk to our neighbor about it and she told us miss kitty’s name: “Furball”, and that she is a pretty old mama cat.   She was sad that Furball had flown the coop in search of calmer waters but grateful we were looking out for her.  Maddie said she looked more like “Nermal” from “Garfield” than a “Furball”, and Paul began calling her “Furble”.

Then, one day Furble left us half of a frog by the back door, and that was that.  She had officially adopted us.

Since then we’ve gotten at least one mole, a baby snake (which she ate most of in front of us), several lizards, and most recently, a baby bunny. (Again, not everyone is going to appreciate it if your outdoor cat leaves half-eaten carcasses on the doorstep. Keep them safe inside!)

Furble spends most of her time laying in the sun on our back deck, or sitting by our back door, begging for food.  In nasty weather we try to entice her into the garage, but we can’t let her in the house.  Our resident house cats would never forgive us.  Also, we don’t know what sorts of weird cat viruses Furble could be carrying from always being outside, so we always wash our hands after petting her so we don’t transmit anything to our indoor kitties.

But, she’s a great little cat and I hope we can do our part to make her old age comfortable.  She’s certainly made herself a part of the family! 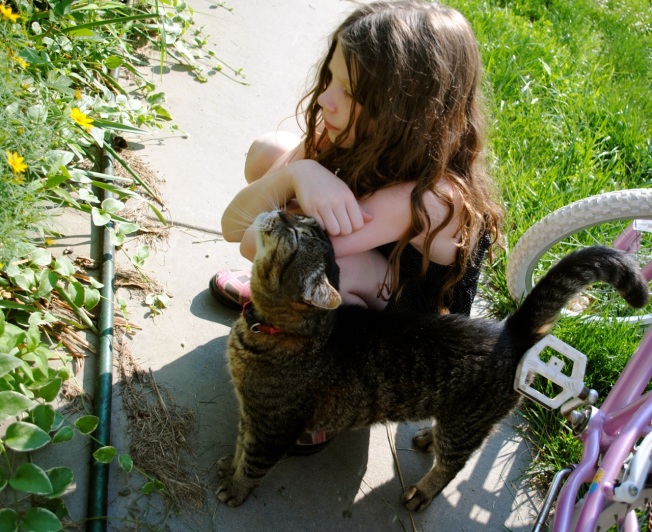