The garden has gone fairly berserk with zucchini and yellow squash.  Every year I overgrow them and every spring I always forget and do it again.  This year I am making a note in the farm journal to plant LESS summer squash and more potatoes and peppers instead!

So squash.  We had several days of rain last week and I didn’t venture out to the garden at all.  Once the clouds parted and I could get back out there I discovered some monster zucchini growing under the jungle – like leaves.  I don’t like them getting too big – they’re not as flavorful; but they are funny.  Here’s one next to a normal – sized zucchini: 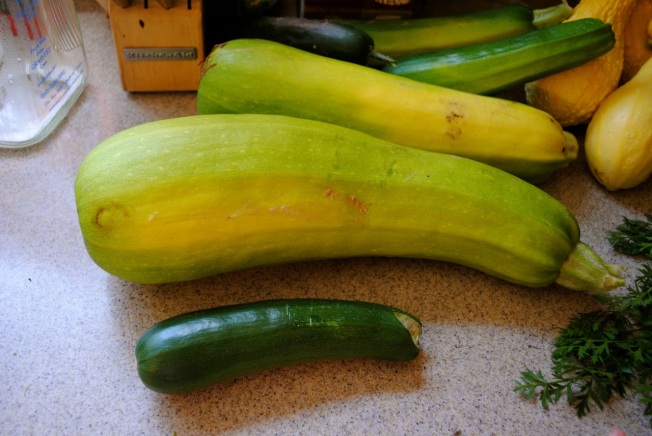 The same day I harvested the squash I also pulled some carrots and peas.  I can’t tell you how excited I am to grow carrots!  They are far more “carrotty” than any store bought variety.

But while the carrots and peas have been coming in at a slower pace the squash has been taking over everything.  I’ve been sneaking it into people’s cars when they are foolhardy enough to stop by.  I’ve grated some of the zucchini and frozen it in ziplocs for baking later.  I have blanched and frozen slices of squash for use in soups later.  And I am still overloaded.  Fortunately we love squash on the grill, and I also have a smashing recipe for zucchini that even the pickiest ones around here love.  It’s adapted very slightly from Cooking Light.

First you roughly chop up about 8 cups of zucchini (I slice it, then quarter the slices).  Along with it, chop up half a medium sized yellow onion, and toss them in a stock pot with about half a cup of vegetable broth.  You can also use chicken stock, but I have a vegetarian in the house, and it doesn’t make much of a difference in the final dish. 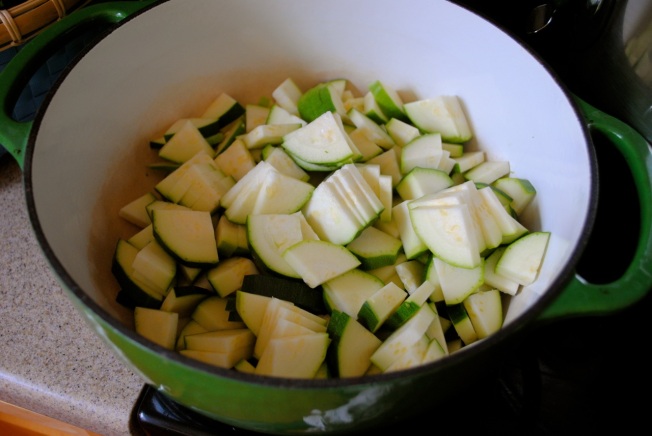 You’ll want to boil it, covered, on medium heat until the squash softens up.  Then remove it from heat and mash it slightly.  Drain any excess liquid.

While the squash is cooking make 2 cups of rice.  Combine the cooked squash and rice in a large bowl and add a cup of sour cream, about a cup and a half of shredded cheddar (we like cheese around here!), a quarter cup of grated parmesan cheese, a quarter cup of breadcrumbs, 2 eggs, salt & pepper.  Mix it all up and spread it into an oiled or sprayed casserole dish.

Bake for about 30 minutes at 350.  You can also broil it at the end to get the top nice and crisp. 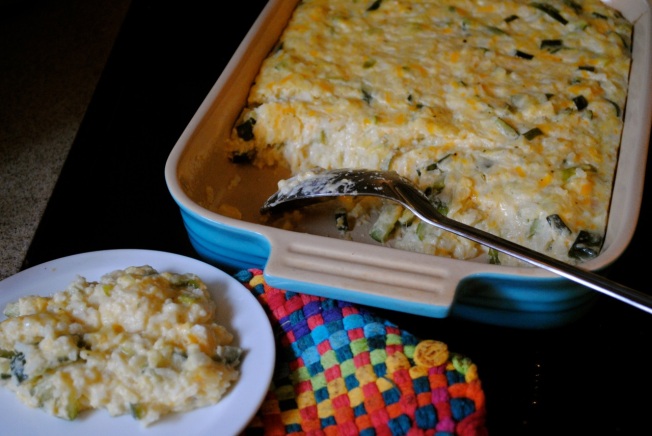 Super easy, super yummy, and it uses up a good amount of zucchini.  And if you don’t have any, come over and get some!

4 thoughts on “In The Garden : Zucchini”