This week we played host to “Yarn Share” prep with Susan and Lauria to get out the latest yarn shares and The Shepherd and The Shearer shares.

This involved dyeing some yarn, packaging some yarn, and just a smidge of tagging yarn.  And by “smidge” I mean something like 7,500.

Yup.  We took turns stringing twine through product tags and tying them onto hanks of yarn to be packaged and shipped out.

Fortunately Maddie had a ready supply of friends willing to help out while Lauria got the dyeing and labeling of packages accomplished.  It took nearly two weeks.  But friends, let me tell you.  Our hands felt divine after handling all that wool with its soothing lanolin still intact!

I even got to try my hand at dyeing yarn for the first time!

I didn’t dye any of the share yarn – I was waaaay too nervous I’d mess that up!  But I had some farm yarn (Cormo/Mohair) kicking around that I threw in the pot.

Isn’t it gorgeous?  It’s exactly what I was hoping for.

My friend Tanya threw two of my skeins into a batch of the cranberry dye as well, and it is AMAZING.  But I don’t have any pictures of it at the moment.  Sorry! 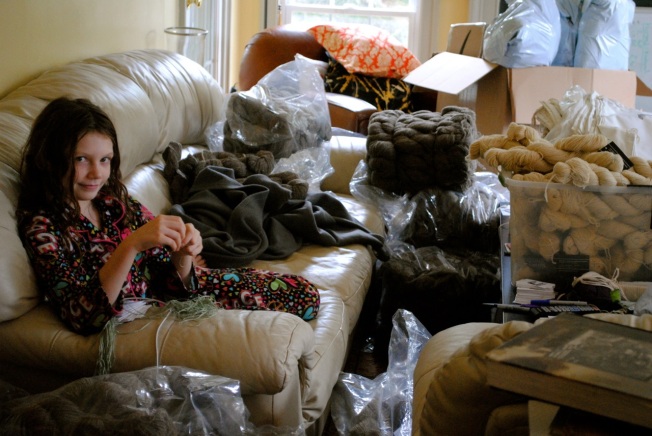 Our house was overrun with it!

There were times where every one of us was tempted to lose hope that it would ever get done and sent out, but thankfully we had some of the most hardworking and fun people on the job.

Now we are done and our Tibetan mountain range of wool has become a mere Catskills.

Time to relax, recoup, and get back to routine.

Once upon a time there was a smallish possum called Pocket.  No one knew how he’d wound up living in the garage, but he was glad that it was warm and dry, and there was plenty of food that Furble the cat was willing to share.

One day the big human named Paul found Pocket hanging onto the back of the fridge and tried to chase him away.  It frightened Pocket and he spent the next month hiding in the relative safety of Under-the-Auto-Lift.

Every day Pocket could hear the goings-on of the humans.  They spent a lot of time stacking boxes of sweet-smelling wool and moving around bins of delicious feeds of various types.  It was scary, but Pocket was afraid to venture out of his hiding spot into the great, wide, open world.

Then one day, a large group of the humans was making quite a racket above him.  Pocket became very worried; the noises were very loud and right above his head!  Were the humans aware of his presence?

Very, very timidly, Pocket poked his nose out to sniff at the air.  Before he knew it, the commotion had increased all around him.  The humans had found him!

They gathered around Pocket, blocking him in and poking around him with a stick.  It was very scary!

They were trying to make Pocket leave his hole.  But Pocket didn’t want to leave!

“Get me something to smack it with!” yelled one human.

“Don’t you dare!” yelled another. 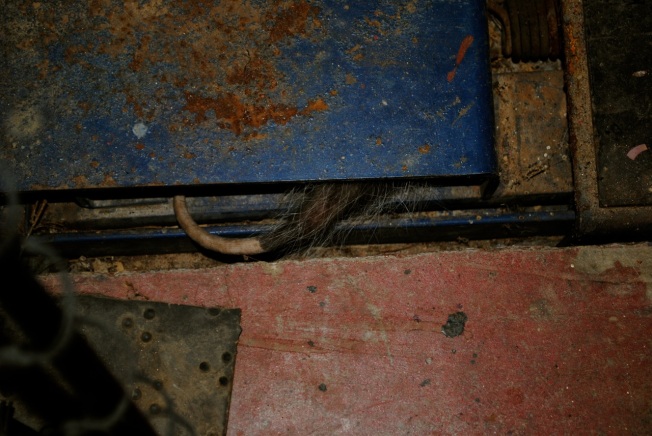 Pocket kept turning in circles, trying to avoid the little stick they were poking him with, and trying to get a better look at what was going on above him.  Perhaps he could find an escape route!

Perhaps his friend Furble could create a distraction while Pocket escaped!

But Furble was taking a snooze.  She said “I ain’t bovvered”.

There was a small colorful human that kept squealing.  Pocket was starting to think he should try to escape.

All around him and above him were boxes and faces.  On one end, there was a net!

Pocket thought he could aim for one corner and climb over the weakest box wall.

He went for it!

But then suddenly there was a giant hand around him!  And that hand pushed him into the scary net!

What was going to happen to Pocket?  He squirmed and twisted, trying to break free from the net!

The humans were standing all around Pocket.  He was very frightened, but he tried to be calm.

Some of the humans were gathered close, smiling at him.  Pocket wasn’t sure what to make of it. 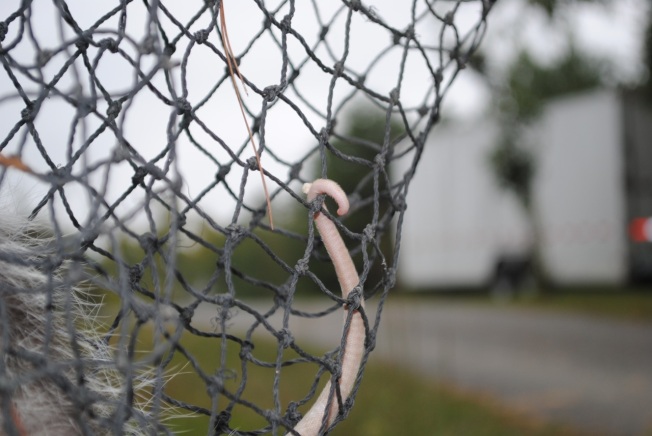 He held tight to one end of the net with his tail, hoping he could squeeze out through one of the holes in the net.  As he sat there with the humans all around him, he saw trees coming into view.

Trees!  Something deep inside him stirred.  The trees made him feel happy! 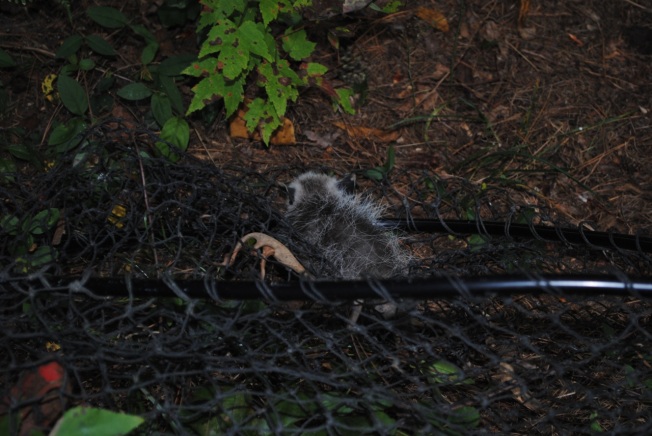 Then the human with the net set him onto the ground!

Pocket felt so happy as he sniffed the air and moved cautiously from the net.  He was free!

The lovely green, wet smell of the woods smelt delicious.  Pocket was a free Possum, and he was on his way into the woods, many grand adventures ahead of him! 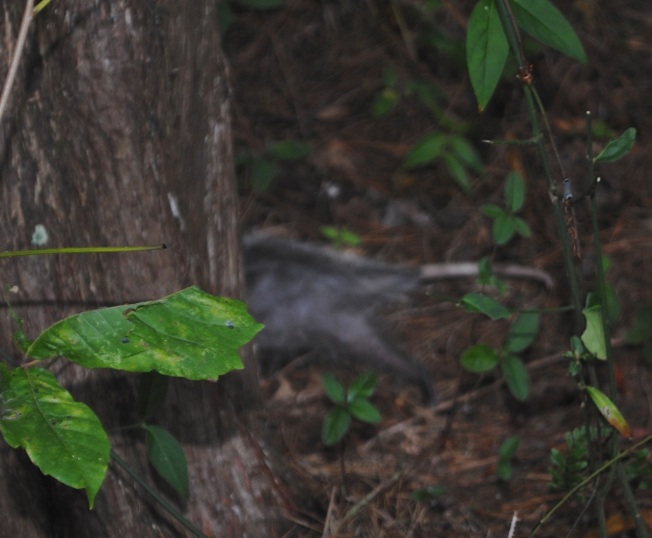 Pocket felt so happy as he ran into the woods, the sounds of cheering humans behind him.

YARNSPLOSION!!!!  Yes.  Every box you see in the garage is packed full of yarn. 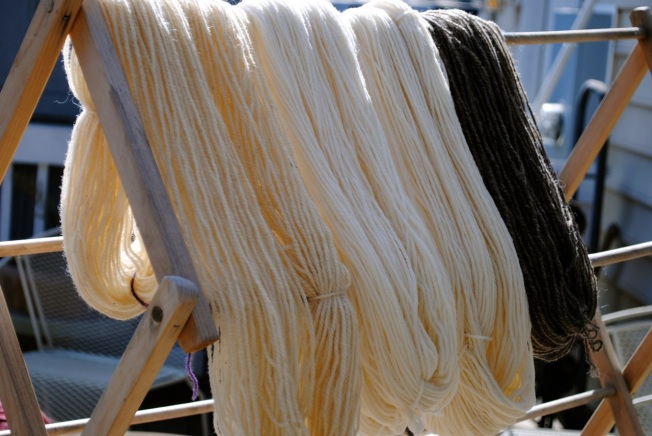 Lauria has been here hard at work sorting through yarn and hand dyeing large batches of it. By hand.  In pots over hot burners. And it’s next to impossible to make every batch come out exactly the same.   It’s times like these I am glad I don’t do this for a living; it’s a lot to keep track of, and it’s a lot of work.  And I am starting to think Susan doesn’t charge enough for it!

The weeds are out of hand this year.  I know I say that every year, but I had truthfully done ZERO outside to control them since spring.  For one, the weed whacker is broken.  Two, it’s either been mad rainy or mad hot.

This weekend, however, it has been clear and sunny and relatively cool, with a high of around 80.  Time for some weeding!

The weed whacker is still broken!

And my pinky toe that I broke a few weeks ago (stupid, stupid.  Misjudged the bottom of the stairs around 2 in the morning and landed on my pinky toe.  It made a nice “crunch”) is still not quite healed.

How on earth to manage those pesky weeds?? 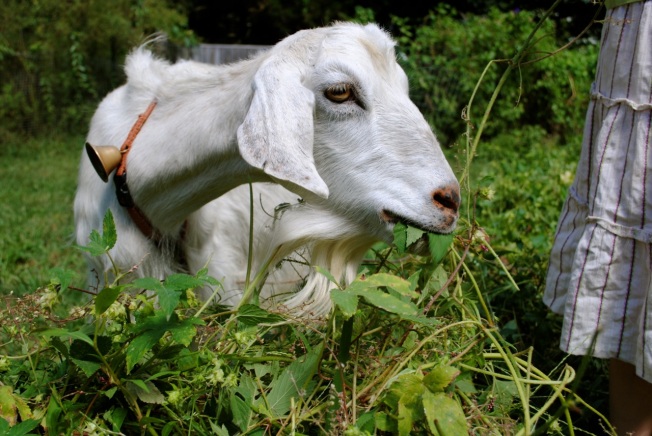 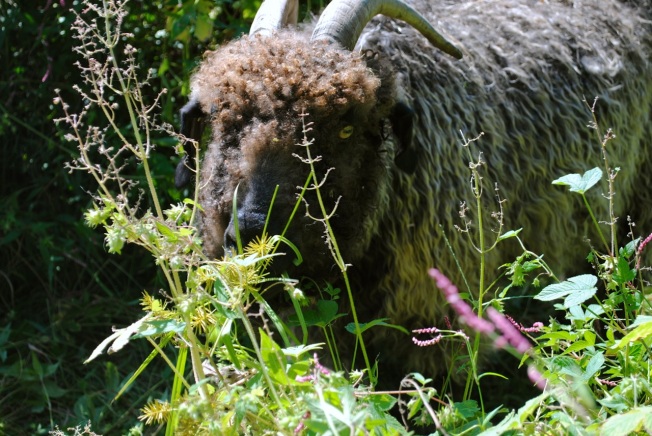 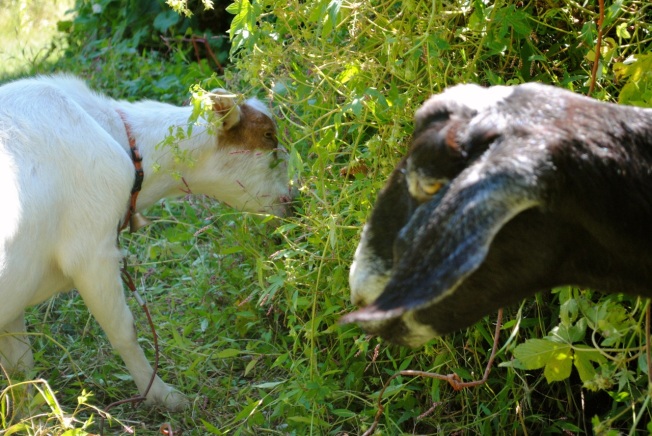 They all love munching down those virginia creeper vines that make me so crazy.  In one weekend these four will rip out and eat all of that overgrowth that has been plaguing the front garden for months, and I won’t have to get sliced up by prickers or assaulted by spiders.

As for the back garden: there are still sweet potato vines that look like they may produce fruit, so I don’t want to throw goats or pigs in there quite yet.  For now I have put the ducks out there.  There’s plenty of forage in there for them and bugs and they shouldn’t be able to damage the sweet potatoes too much.

We have officially started school again and are working to settle into our routine.  I’m still driving Maddie to her classes at the community college (I know!  College student!  It was a really, really hard year to get her caught back up to speed, but I’m proud to have gotten her to where she is), so it’s a bit hectic these days, but we’ll get it figured out.  Maddie is waiting on some paperwork so she can get her license and then we’ll breathe a little easier.  The good news is that we have Susan completely moved out of her old house, so soon our days (though they will shorten daylight-wise) will get simpler, quieter, cozier, school-i-er.  Just the way I like them. 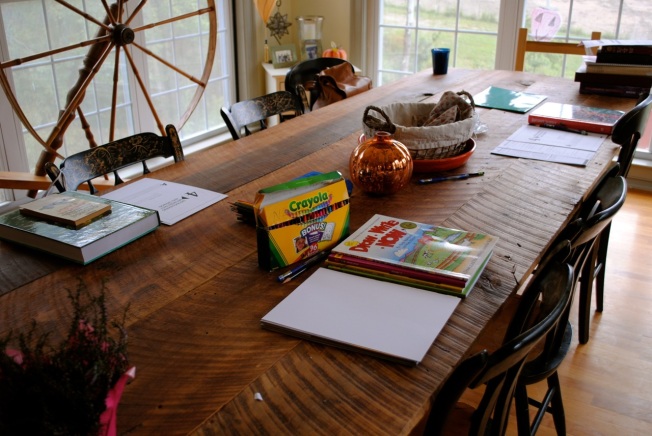 Oona is reading chapter books on her own now, which both amazes and delights me.  I can’t believe how once the idea of reading “clicked” with her she really took off with it.  Though she’s technically in first grade, last year we zoomed through the first half of her first grade books and are now working on the second half of them.  (And thanks to Mad Libs she already knows the basic parts of speech).   It really helps having big sisters to try and catch to!

We’ve written everyone’s duties on chalkboards so there’s no more “confusion” as to who is doing what every day.  The only thing that changes is who dies the dishes from day to day. 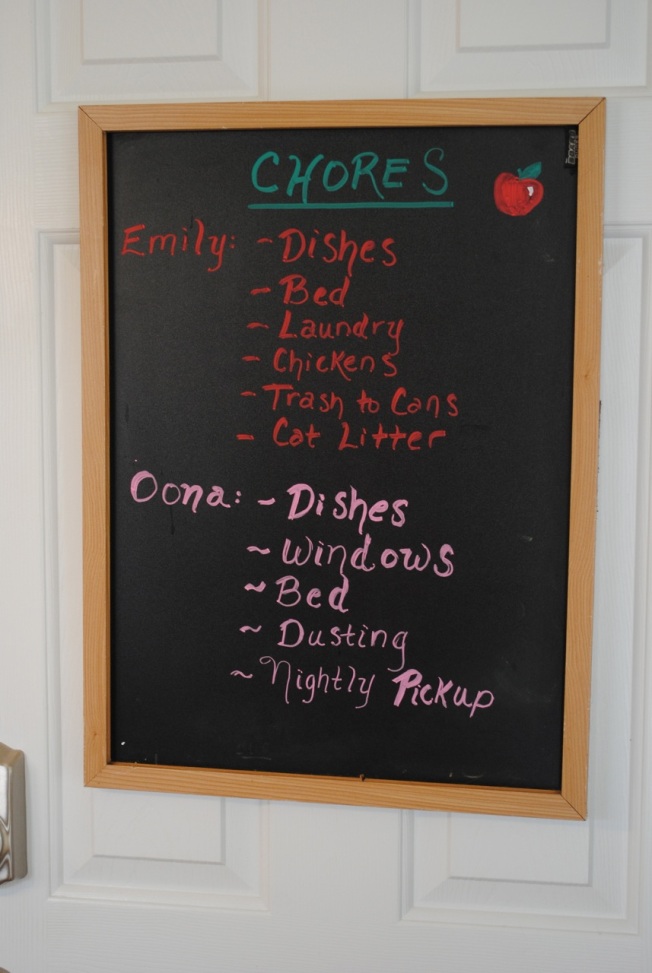 Neve and Maddie help out with feeding the flock every day (I usually do mornings since I am up before everyone else, and I don’t like letting too much time pass without laying hands on everyone).  Oona’s getting better at dishes, though there’s still some cleanup to be done after her just to be sure.

We’re ready for crisp days and chill nights, fires in the fireplace, applepicking and cozy sweaters.   I hope it lingers this year; our favorite season always seems too short.

As I frantically try to finish up three Tiramisu dresses I have cut out, I have added more to the sewing pile.

Today I got an email announcing the fall pattern lineup over at Oliver & S.

One of the patterns in particular caught my eye, because it’s a nearly exact iteration of the playdress and leggings combo I used to buy from a certain overpriced Scandinavian-inspired company.

I immediately emailed the link to my friend Lisa and I am pretty sure we both squealed in delight.

All I need are some cute knit fabrics!  Can’t you picture Oona tearing around the house in such a set?

The sizes go up to a childrens’ 12, so even Neve could benefit.

Pretty sure I will be downloading this and pouring over internet fabric stores tonight.

Yes, we are still cleaning out Susan’s old house.  Mostly it’s all books now, so it should go fairly quickly and she will be all packed up.

This week we decided to take a few days off and have some fun.  We spent a day out at Ikea (Neve and Maddie are smitten) and we spent a day dyeing yarn and hair.

While they were waiting, the girls put on socks and sprayed some pledge on the floors.  Clean floors and worn-out kids is a great combination! 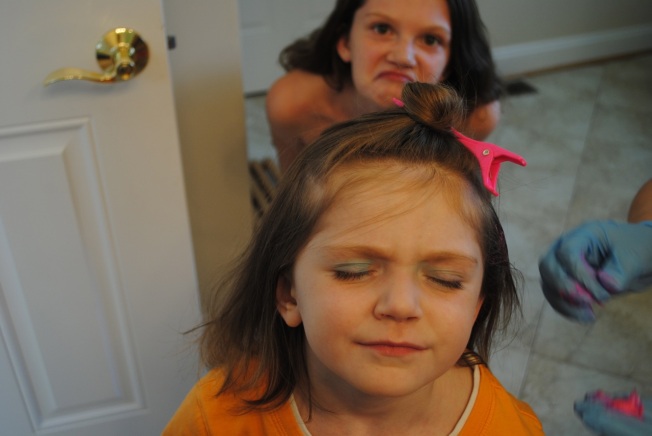 It took two tries to get Oona’s hair pink.

That’s the beauty of homeschool.  My kids can have crazy hair.

Neve wanted to be “ginger” so we put orange highlights in.  Oona of course chose pink.

The colors are a demi-permanent, so they wash out after a few shampoos. 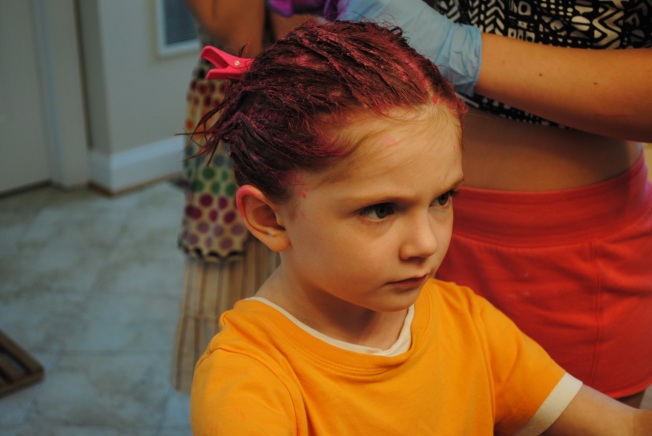 I have never seen Oona so patient as when she was waiting for the color to do its work.

More share color preview.  The final color is sooooo much nicer and richer than this.

After the first attempt at Oona’s hair was a total bust we had Maddie try again a few days later.  The result?  A super happy Oona who couldn’t stop jumping up and down and exclaiming her love for her hair. 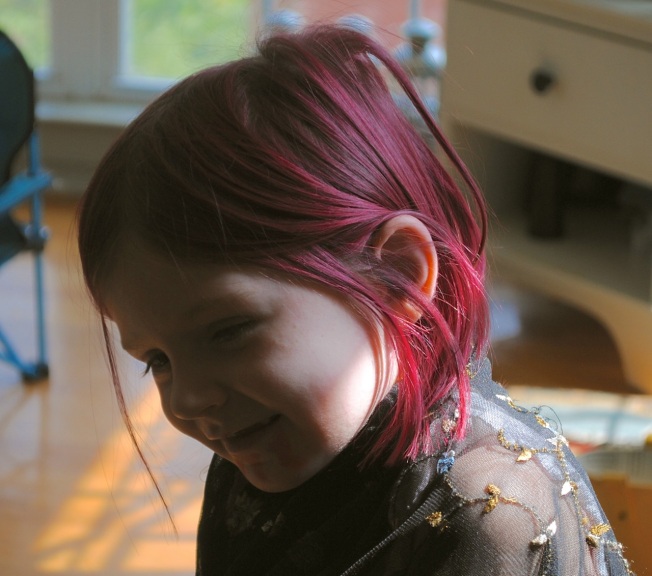 She’s decided today that she has vampire hair; hence the red on her chin (it’s fake blood).

Yes, my kids are already looking forward to Halloween, and for once I am starting to feel the excitement, too, because IT’S SEPTEMBER!!!!!!!!