When my little Mac was just starting to make sentences and absorb the world around her she had her own interpretations of what we’d say that would crack me up.  Some I still use (“joe-mamas instead of pajamas, anyone?), some I’ve forgotten, some I only think of once in awhile.  For example, “a big one”. 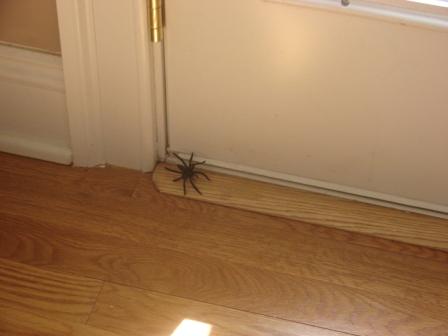 Whenever she saw a spider, she’d say, “A big one!  I saw a big one!”  It didn’t matter if it was huge or so teeny tiny as to be barely visible.  She didn’t know “spider”, she only knew “a big one”.  Probably because I only ever talked about them if they were big.  When Paul got home from work I didn’t bore him with the details of every spider I saw during the day because, quite frankly, we see so many around here that you think I’d be over my fear by now.  So spider conversations around here usually go something like Holy Mary Mother of God I saw A BIG ONE in the shower today!!!!!

Anyway, there is a point to this.  It seems that since we’re all too busy and stressed out around here to play pranks on each other the Universe did it for us a few times these last few days.  I speak of the photo above.  It ain’t real.  That’s a Halloween ring that had fallen under the buffet that we moved to make room for the chest freezer.  So that was Gotcha! number 1.  Hey, at quick glance out of the corner of your eye, tell me that wouldn’t freak you out while moving your dusty old furniture.

Then it got kicked almost under the fridge while I was vacuuming aforementioned  dusty spot and sat there until Neve screamed bloody murder on her way out to the garage.  Gotcha! number 2.  Then Maddie went to check out the source of the scream, and Gotcha! number 3.

So it’s hanging around, giving us all a mild start when it surfaces in various places around the house.  Neve and I have been calling it Steve.  As in, “Oh, it’s ok, it’s just Steve”.

But the weather’s getting warm.  Summer’s coming.  And  I fear that one of these days it won’t be Steve.